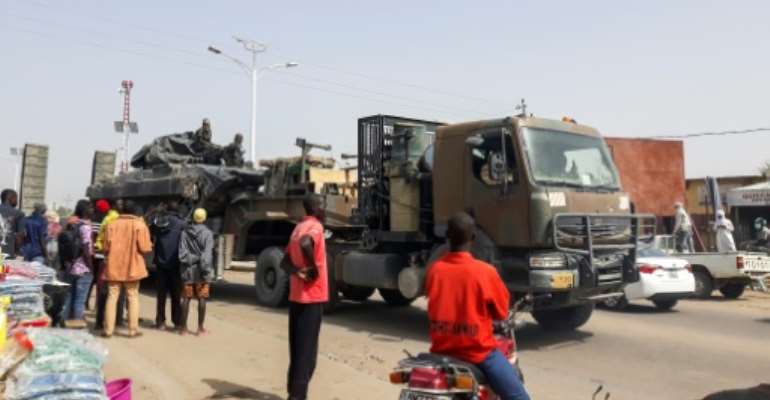 Chadian troops and their equipment arrived in the capital N'Djamena on January 3 at the end of thier mission fighting Boko Haram in neighbouring Nigeria. By - (AFP)

Chad has ended a months-long mission fighting Boko Haram in neighbouring Nigeria and withdrawn its 1,200-strong force across their common border, an army spokesman told AFP on Saturday.

"It's our troops who went to aid Nigerian soldiers months ago returning home. They have finished their mission," spokesman Colonel Azem Bermandoa told AFP. "None of our soldiers remains in Nigeria," he added.

He did not specify if they might be replaced following Friday's pullout which saw them "return to their sector at Lake Chad."

However, Chad's general chief of staff General Tahir Erda Tahiro said that if countries in the region which have contributed to a multinational anti-jihadist force were in agreement, more troops would likely be sent in amid local people's fears of a security vacuum.

The Chad troops, brought out in pick-up trucks and tank transporters, crossed the bridge back to their home capital of N'djamena via the Cameroon border town of Kousseri under the curious gaze of locals, an AFP reporter said.

News of the pullout, coupled with a local report of Nigerian troops also leaving the vicinity, sparked concern among local people in the small town of Gajiganna, hundreds of whom promptly fled the area citing their fear of further attacks.

The Chad troops riding pick-up trucks and tank transporters, crossed the bridge back home to N'djamena via the Cameroon border town of Kousseri under the curious gaze of locals. By - (AFP)

The Chadian soldiers had had a garrison there as well as at nearby Monguno, close to Lake Chad itself.

An anti-jihadist militia source told AFP: "From what the Chadian soldiers told us their withdrawal is as a result of the expiration of their mandate which was for nine months."

The source added that "as soon as they left most residents of Gajiganna fled to Maiduguri for fear of attacks by the terrorists. They left because Nigerian troops working alongside the Chadians also left the base soon after the Chadians had moved out."

One Gajiganna resident who fled said: "I left Gajiganna and moved to Maiduguri on Wednesday when I realized that Nigerian soldiers had left their base soon after the withdrawal of Chadian soldiers".

He told AFP he had left with around 300 other people on learning of the troop pullback as people felt exposed and unprotected from Boko Haram attacks."

Tahiro had earlier told AFP that "if the states around Lake Chad agree on a new mission there will surely be another contingent redeployed on the ground."

Boko Haram began the insurrection in Nigeria a decade ago, leading to at least 35,000 deaths with violence spilling over into Chad, Niger and Cameroon.

Last month saw 14 people killed with 13 more listed as missing after an attack on a fishing village in western Chad.

Countries in the region have banded together to fight Boko Haram and ISWAP with support from civilian defence committees.

Those troops have now pulled back across the border to be "deployed in the Lake Chad region to strengthen security along the border," a senior local official told AFP.

Cameroon says it is battling an upsurge in Boko Haram attacks and, according to an Amnesty International report published last month 275 people, including 225 civilians, were killed there last year.