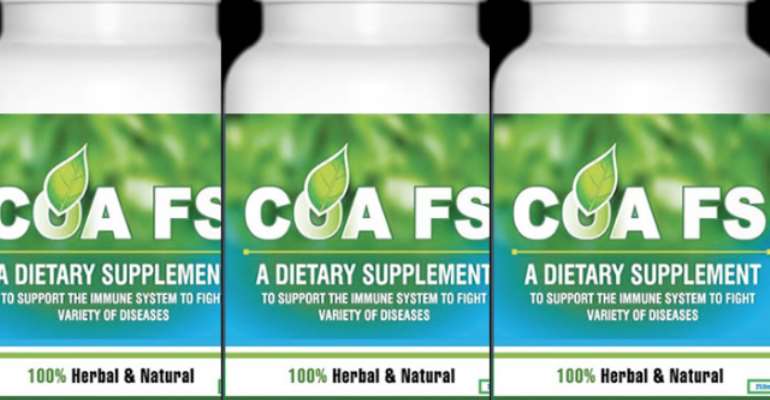 Manufacturer of COA FS immune booster, Prof. Samuel Ato Duncan has said that the product has the potential to earn Ghana billions of dollars annually to fund Free SHS and another major social intervention project if it gets government backing for the further research required.

He was speaking on Personality Profile on PM Express on Joy News TV.

COA FS, manufactured by Prof. Duncan's Centre for Awareness (COA), has been approved by Food and Drugs Board as an immune booster.

Because of its efficacy in boosting the human immune system to fight deadly disease-causing viruses and bacteria, it was viewed by many as a cure for HIV, which generated considerable controversy around the product.

Prof. Duncan noted that whereas the product is not yet an approved cure for HIV, he believes that with further research, it has the potential to be the cure for many terminal diseases like cancers, hepatitis, diabetes and indeed HIV.

He noted that the product has proven efficacious in dealing with kidney failure, cancer, Ebola, diabetes and many other diseases, with living examples of cured patients, all of which are also well documented.

"Indeed, a researcher in South Africa used COA FS and its injectable version called COA 72 on HIV patients in that country and they proved efficacious in fighting the virus. Both the researcher and the patients have since been to Ghana to testify themselves," he said.

Ghanaian Scientist with the WHO, who used to work with Noguchi Memorial Institute, Dr. Jonathan Ayittey, personally testified of how COA FS proved efficacious in helping him manage his own diabetic condition.

He then urged the government of Ghana to put their weight behind the product and push it to a level where WHO will accept it as the drug of choice for HIV and other deadly diseases, after the necessary research and protocols.

Several scientist and scientific research institutions have also issued positive reports on the safety and efficacy of the product and declared it safe for human consumption, and have also recommended further studies.

While GAC is still at it, Prof. Duncan said some US-based research institutions have seen the potential and have contacted him to move to the US, naturalize there and develop his drug, but he insisted on making the drug Ghanaian to benefit Ghana.

"Alfred Nobel University in Ukrain has also offered to support further research into the product to separate the various components and develop cure for the terminal diseases that have plagued the world for centuries," he said. "This is all part of their pursuit for world peace, which COA also shares".

Professor Duncan also said he has had contacts from China and other countries, who are even willing to go into mass production of COA FS ahead of further research to develop full drugs, but he is still weighing his option, with Ghana's interest in mind.

He was surprised that all these were happening around the world and yet officialdom in Ghana are not as keen about the product.

The professor said he is bent on helping to develop his country through the gift he discovered here in Ghana and he is confident that, that day will surely come.

He has no doubt in his mind that when the necessary research is done across various geographical locations in the world, and COA FS becomes the drug of choice for an otherwise terminal disease, Ghana will rake in billions of dollars annually for development.

He said currently, the particular herbs used in producing the product is only being grown in limited portion, but when it becomes a national asset, there would need to cultivate thousands of acres of the herbs, which will provide jobs and another source of income for farmers.

"This product has what it takes to make Ghana money, provide jobs and help us deal with lots of our development challenges but we are just sitting on a gold mine and not doing much to harness it," he said.