Libya MPs call for break with Turkey over military deal 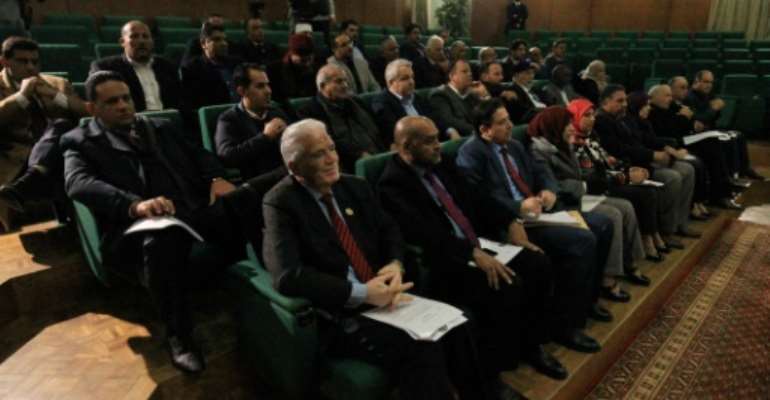 The Libyan parliament holds an emergency session in the eastern city of Benghazi. By Abdullah DOMA (AFP)

Libyan deputies voted Saturday for a break in diplomatic relations with Turkey over its controversial agreements with the UN-recognised government that is contested inside the North African country.

At an emergency meeting in the eastern city of Benghazi, parliament also urged the international community to withdraw recognition of the Government of National Accord (GNA) which MPs accused of "high treason" because of the maritime and military deals it signed with Ankara in November clearing the way for a Turkish military intervention on its side.

Parliament speaker Abdallah Bleheq said MPs voted "unanimously" to scrap the accords, which they likened to "a return of colonialism", and to sever ties with Ankara.

The parliament, which was elected in 2014 and took refuge in eastern Libya, has been weakened by divisions within its ranks and the departure of around 40 members to Tripoli, the GNA-controlled capital.

Saturday's meeting fell short of the required quorum, according to pro-GNA media, but there was no independent verification of the number of MPs who took part.

The parliament is allied with military strongman Khalifa Haftar, who is at war with the GNA that is headed by Fayez al-Sarraj.

Turkish lawmakers last Thursday approved military deployment in support of the GNA, which has been hit by a Haftar offensive against Tripoli since early April.

According to interior minister Fathi Bachagha, the agreements with Turkey were concluded "legally and openly", unlike deals between Haftar's forces and his foreign supporters.

Saudi Arabia, Egypt and the United Arab Emirates, which have tense or limited ties with Turkey, support Haftar.

The UN's Libya envoy, Ghassan Salame, has said Russian mercenaries are operating on the ground on the side of Haftar and has accused several countries of violating a UN arms embargo on Libya.

Libya was plunged into chaos with the toppling and killing of longtime dictator Moamer Kadhafi in a 2011 NATO-backed uprising. It has since become divided between the GNA and rival authorities based in the country's east.