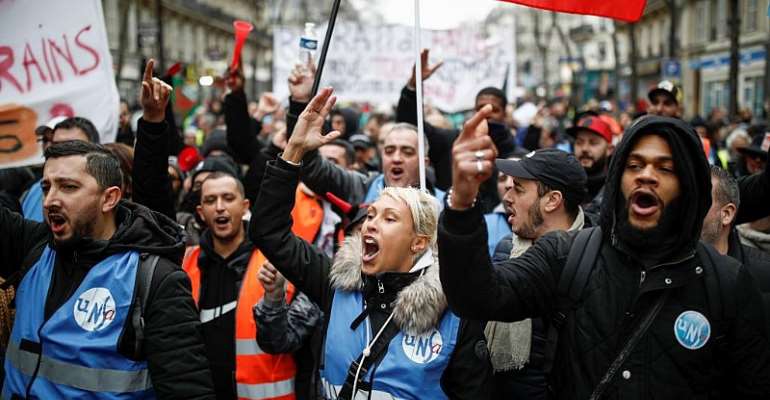 Representatives of more than 16 professions including doctors and lawyers have joined strike action to defend their self-funded pension schemes which they say the government's pension reforms ignore.

Lawyers, doctors, nurses, physiotherapists, pilots – some 16 professions across the healthcare, law, finance and aviation sectors – united on Friday 3 January to form the “SOS Retraites” collective, calling for strike action in some cases through next week.

Nurses and physiotherapists were encouraged to stop work and doctors to close their clinics. Financial workers were invited to organise a "day of disruption" on 6 January.

Laywers will begin a week of strike action on 6 January. Two unions representing pilots and cabin crew at Air France will strike on 6-7 January, air traffic control from 6-9 January and civil aviation from 13 January.

Defending a separate, self-funding scheme
While transport workers – some of whom benefit from so-called "special regimes" – have been leading the strike action against President Emmanuel Macron's proposed pension reform, professions represented in the SOS Retraites collective have separate, self-funding, pension schemes.

Yet they say the reforms, which would bring the existing 42 different pension schemes under a single points-based system, would be deeply disruptive as well as costing staff more.

“The pension reform will double our pension contributions, from 14 to 28 percent”, Nicolas Blatz, a psychiotherapist and member of SOS Retraites, told RFI.

He also rejects the fact the government would take control of their pensions.

“We want the government to let us continue managing our own pension funds, to leave us alone and let us work. This reform does not concern us. We have a surplus."

Indeed, SOS Retraites maintains they have been paying into independent systems for decades and contrary to some pension schemes, which are in the red, they haven't cost the state a penny.

“We reject the universal scheme and want our self-funded schemes to be maintained because they function particularly well,” lawyer Christine Féral-Schuhl, president of the CNB (French bar council) told RFI.

“Lawyers pay 100 million euros into the pension system each year”.

Risk of medical and judicial wastelands
“Our professions do not usually go on strike," Féral-Schuhl continued. "We serve society, so striking is not in our culture. But talking to the government is like talking to a brick wall.”

They want to be excluded altogether from the pension reform.

"Our structures are fragile, often with just one employee," Féral-Schuhl says. "So there's a risk of creating areas deprived of judicial and medical services".

The group also called for the state to take responsibility for its role in “spreading confusion” over “special systems” such as those which apply to some transport workers and Paris Opera ballet dancers who can retire early due to their physically demanding work.

“We are not a special system but we're independent; independent and united,” said Féral-Schuhl.

Transport strike takes toll on Paris shops
Talks between unions and the government are to resume on Tuesday 7 January to try and find a way out of the transport strike – now in an historic fifth week.

But hopes for a breakthrough seem slim.
The CGT union has called a four-day blockade of fuel refineries and depots starting Tuesday. And several unions have called another day of mass demonstrations for Thursday, when teachers, hospital workers and others are expected to join the strike.

In a New Year's Eve address Macron insisted that he would push ahead with the reform, which will be presented to his cabinet on January 22 ahead of a parliamentary debate.

But he made one key concession: that people with arduous jobs would continue to be allowed to retire earlier – a main sticking point in talks with unions.

On Friday, Finance Minister Bruno Le Maire called on union leaders to accept the hand offered by the prime minister “so that together we can find a compromise”.

Le Maire was meeting Paris shop owners hurt by the strike. According to the CMA business federation, shops in the capital have seen their revenues down 30 to 40 percent.

A poll published Friday showed a majority of 61 percent still support the strike, although that was five points lower than a 19 December survey, according to pollster Odoxa.