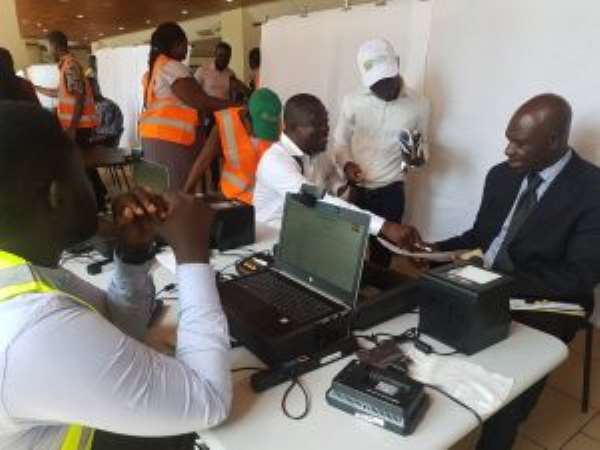 The Bureau of National Investigations (BNI) has turned its eagle eye on corrupt officials of the National Identification Authority (NIA) operating in the Ashanti region.

This comes after the cover of the officials was blown for extortion of money from applicants in the ongoing Ghana card registration in the Ashanti region.

There have been widespread allegations by applicants in parts of the region that registration officers at some centres are taking monies to register people whom they described as “protocol” while leaving the others to queue for hours.

In an interview with Citi News, Head of Corporate Affairs at the National Identification Authority, ACI Francis Palmdeti called on the public to assist the authority to apprehend the wrongdoers.

“Following our hearing of these incidents, we have informed the BNI, CID and National Security. Plain cloth officers are actually going to some of these centres to see what is going on and I believe it is just a matter of time and these individuals will be arrested. Nobody is required to pay any kind of money for the service you are rendering or the service you are providing so if any of our personnel is found conducting himself in that manner the first thing to do apart from gathering the evidence is reporting and it should be dealt with precisely.”

“But we are encouraging our applicants in the Ashanti Region to be bold in confronting such individuals and draw our attention to it. As we haven’t had any ascertainable information, we are encouraging the general public to get us some information but at the same time bear in mind that they have to report such incidences to the police”.

According to some frustrated applicants who spoke to Citi News, when they attempted to confront the NIA officials on their unscrupulous activities, they threatened to abandon their posts so the applicants would do the registration themselves.

This, according to the Authority, was to restore “the two registration days (27th and 28th December) lost to the Region because of the Christmas holidays” and also “account for the challenges encountered in the first two days of the exercise in many communities across the Region”.

According to the statement, the mass registration exercise is scheduled to commence in the Central, Western and Western North Regions immediately after the Ashanti Region exercise ends.