Life after death: the lasting legacy of Albert Camus 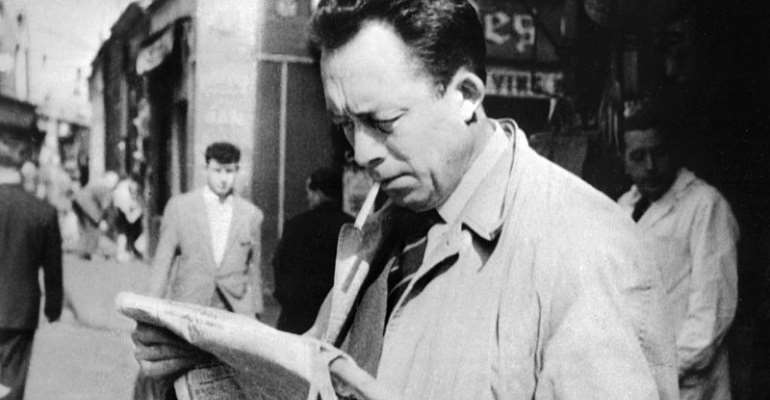 Albert Camus, one of the most influential writers of the 20th century, died in a car crash on 4 January 1960, aged 47. Sixty years on, RFI speaks to Professor Robert Zaretsky, French history expert at the University of Houston and Camus biographer, about the French-Algerian's extraordinary legacy.

What are the core ideas of Camus' philosophy?

““For Camus, meaninglessness or absurdity is a consequence of two forces: humankind's thirst for meaning and the world's silence. No matter how insistent, loud or ardent our demand for meaning is, the response from the world or the cosmos, as Camus more than once called it, is tender indifference. So the convergence of our need for meaning and the refusal of the world to offer any form of meaning leads to our absurd condition. And acknowledging the absurdity of the world for Camus means that we need to turn to one another and to collective action for meaning.

“His first cycle of works, which he called the cycle of absurdity, has three works in it: The Stranger, The Myth of Sisyphus and Caligula. During the Second World War, when he became the editor of the resistance newspaper Combat, and in the years immediately following the war, he wanted to know what our response to this absurd condition should be. He thus turns to a second cycle of works. In the cycle of absurdity, he gave us a diagnosis of absurdity while in the second cycle, which he called the rebellion, he offers a prescription to what our response should be. That cycle also has three works: The Plague, The Rebel and The Just.

“In that cycle he sees resistance, a kind of intense, even extreme moderation, as our response to meaninglessness or the absurd condition. In The Rebel, he tweaks Réné Descartes' famous notion 'I think therefore I am'. For Camus, it becomes 'I rebel, therefore we are'. In a nutshell, that is Camus' diagnosis and cure for our absurd condition.”

Is Camus' philosophy of meaninglessness disheartening or is it liberating?

“It's both. Camus' position is that there is no reason for hope but that is no reason for despair. In other words, as we learn at the end of The Plague, we will never be able to defeat the plague once and for all. The plague can represent many things. In the 1940s, it represented the Nazi occupation of France. It was the most obvious and immediate interpretation of his novel. But it can also mean the new varieties of totalitarianism, authoritarianism or the forms of populism that we now see taking root in Europe and the US.

“As the characters in the book understand, their victory over the disease is not a lasting one. Sooner or later, it's going to collapse under the force of new events. But that's not a reason to stop resisting. We must continue what we have always done. So while Camus is not a wild-eyed optimist, he insists that through our insistence upon maintaining our dignity as human beings, and joining others when it is threatened, we continue to invest our life with meaning. In a way, that's as good as it gets.”

How much of an influence did Camus' upbringing have on his philosophical development?

“His childhood and early experiences in French Algeria had a tremendous impact on the way he saw the world. You can point to so many different factors. For example, his father died when he was just a year old. Camus was born in 1913. His father was drafted into the French army in 1914 at the start of the First World War and died the same year. So Camus never knew him. His father was from France but moved to French Algeria as a young man and became a foreman at a vineyard. Following his father's death, his mother, who was born in Mallorca, moved Camus and his brother to Algiers.

“Camus' mother supported them by becoming a housecleaner. So their upbringing was extremely poor. It was also in many ways a silent upbringing. His mother was deaf and largely mute. She had a vocabulary of a few hundred words and was illiterate. So too was his grandmother (in whose house they lived). One of the elements that I find so compelling in Camus' novels as well as in his philosophy is the presence of silence which is a reflection of the silence of his childhood.

“The impoverished nature of his childhood deeply influenced his writing, his politics and in many respects, his attitude towards life. He became a spokesperson for those who were disenfranchised and disempowered and those who, as he said in his Nobel Prize speech, didn't have a voice. You see this not just in his writing but in his actions during his lifetime.”

Can Camus' ideas be implemented in our daily lives?

“Yes absolutely. For me, his notion of rebellion is perhaps the most important aspect of his philosophy. He contrasts rebellion to revolution. By rebellion, he understands, as I suggested earlier, a kind of extreme moderation. That when our dignity is threatened by somebody or something else, we resist, we say no. But the act of resistance should never lead to us becoming like our oppressor. We should always insist not just on our own dignity, but also on the dignity of those who oppose us.

“I see this playing out in Algeria today with the protest movements against the authorities in Algiers. It's quite remarkable. If Camus were alive today, he would be deeply impressed by the way in which millions upon millions of Algerians are rebelling in moderation against the military rule. So the most important element I would take from Camus' life and thought is this notion of rebellion, as a kind of non-violent resistance against the forces of oppression, authoritarianism and populism that we see springing up across the globe.”

Had Camus lived longer, what writing do you think he would have undertaken?

“When he died in 1960, he had already embarked on the third cycle of his writing works. He had already begun the novel that would be a part of it and was carrying a manuscript of the novel in the car in which he died. That manuscript was of Le Premier Homme or The First Man. It's through the prism of The First Man that I often want to see Camus today.

“He still recognised our absurd condition and the need for rebellion. But at this point in life, he wanted to emphasise the need for love. By love, he didn't mean anything sentimental or squishy. By love, he meant commitment to one's community and to others, to the dignity of all human beings and commitment to nature. If you read his lyrical essays, they express an extraordinary attachment to the natural world. That's almost always the world of Algeria – the coasts, the mountains, the plains. If he had not died in 1960, I do see Camus turning in the direction of environmental action. He would have been a beacon, one of the great voices for green policies and green politics.”