Can Protests Against The Destruction Of The Atewa Forest Reserve Eventually Cause Regime-Change In Ghana? 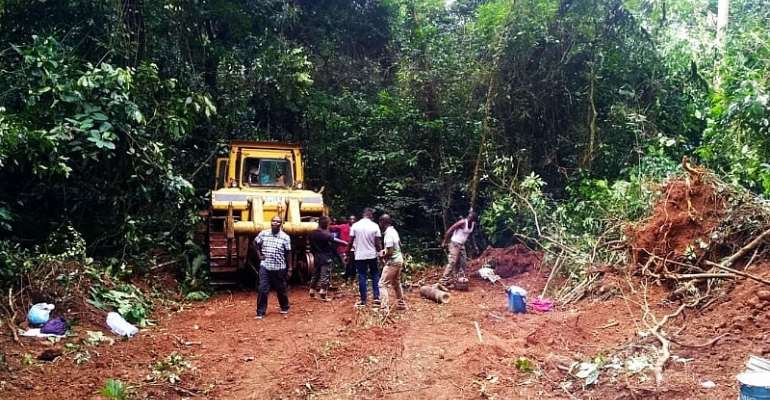 The problem with raging climate change controversies worldwide, is that many on the opposing sides appear to forget that on the scale of geological time, it is the human race that actually faces extinction - because humankind's only home, our biosphere, eventually becomes uninhabitable for human beings. Simple. Definitely not rocket science.

Regardless of the damage caused by humans, today, or tomorrow, in a few million years, the planet Earth will recover and thrive again - if it isn't smashed into smithereens by an object from the universe before then, that is: long after the extinction of hard-of-hearing-humans. Case closed. End of story.

Fellow Ghanaians, it is in that light that the tragic-and-apocalyptic-disaster, which the refusal of successive climate-change-era Ghanaian governments to rescind the shortsighted decision to mine its bauxite deposits and thus destroy the Atewa Forest Reserve in the process, represents, ought to be seen. As a national park, the Atewa Forest Reserve will become a valuable and sustainable green economic pillar creating wealth and jobs galore.

An example of such a valuable local green economic pillar is our capital city of Accra's famed Legon Botanical Gardens. Every visitor to the gardens sees the many jobs, which that well-run and profitable green business has created. And they also see how a haven of nature that size (in which stressed-out visitors can go to commune with Mother Nature in serene surroundings), in a major city, benefits society in terms of it being a carbon sink and source of fresh air in a metropolis whose air-quality is deteriorating steadily.

Consequently, if even gold deposits were found under the Legon Botanical Gardens, for the thousands who visit it regularly to commune with Mother Nature, it would be madness for anyone to allow it's destruction in order to mine the hypothetical-gold-deposit discovered underneath it - which is why they won't stand for it. Ever.

It is a powerful green-economy-fact-on-the-ground-narrative, so to speak, in the conversation about how best, as a people, we can achieve all the UN SDGs, without destroying the natural environment's ecosystems that benefit us and ensure a good quality of life for our people.

In the climate change era, to ensure longterm prosperity, the enterprise Ghana needs more brilliant green entrepreneurs, such as the hardworking and innovative Kofi Boakye-Yiadom, the CEO of the Legon Botanical Gardens - not sodden ruthless miners. Haaba. The greener a nation is, as our biosphere warms up, the more resilient is its system that powers it's prosperity as a society in which no one is left behind. Full stop.

Yes, ours is a democracy, but Ghanaians do not elect governments on the basis that having come to power, governments of the day are then free to disregard the citizenry's legitimate and genuine concerns, about environmental policy issues that affect their collective-well-being, and are existential-and-apocalyptic, in nature.

All the members of Ghana's political class need to understand clearly that right across our homeland Ghana, the norms underpinning governance in traditional societies, of all ethnic groupings, sanction the forceful removal of obdurate rulers, in common-good-matters pertaining to the collective well-being of ordinary people, which are existential and have apocalyptic consequences.

The question is: In the climate change era, should any elected Ghanaian government that attempts to mine bauxite in the Atewa Forest Reserve, be forcefully removed from power - because the destruction of that unique and biodiversity-rich upland evergreen rainforest will ruin the quality of life, and lower the living standards, of millions of ordinary people in southern Ghana? Hmmm, Oman Ghana eyeasem ooooo - asem kesie ebeba debi ankasa. Yooooo...