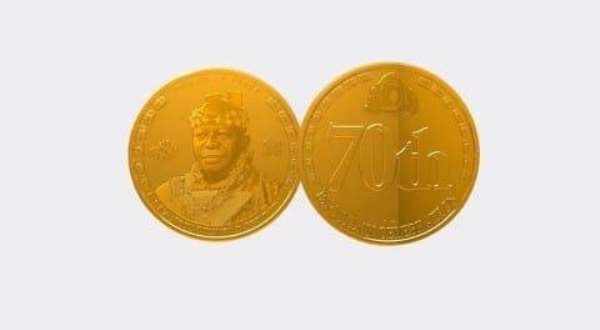 The Bank of Ghana (BoG) has approved the issuance of 24-carat gold coins to commemorate the 20th anniversary of the Asantehene, Otumfuo Osei Tutu II.

The commemorative coin will be exclusively auctioned to the public and proceeds used to fund the establishment of the Cultural Resource Centre.

The resource centre will also promote traditional and customary conflict resolution in the country.

Born as Nana Barima Kwaku Duah, Osei II is the 17th Asantehene of the Asante Kingdom. He was enstooled on 26 April 1999.

Otumfuo is in direct succession to the 17th-century co-founder of the Ashanti Empire, Otumfuo Osei Tutu I.

The Asantehene is also the Chancellor of the Kwame Nkrumah University of Science and Technology (KNUST) and the Grand Patron of the Grand Lodge of Ghana and the Sword Bearer of the United Grand Lodge of England.

His 20th-anniversary commemoration was held on April 21, 2019, at the Dwabirem of the Manhyia Palace.

The grand durbar of the Akwasidaekese had dignitaries like President Nana Addo Dankwa Akufo-Addo, Vice President of Suriname, Michael Ashwin Satyandre Adhin and the Awomefia of the Anlo state, Torgbui Sri in attendance.