Education Policy In Ghana : Separating The Facts From The Fiction And Distortions 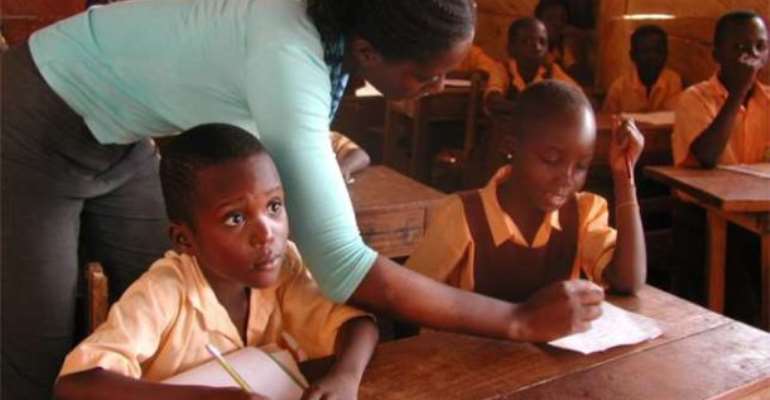 In all jurisdictions, particularly in this part of our world, governments are adjudged to a greater extent by the extent to which they are able to among other things; meet the educational needs and aspirations of the citizenry through policy initiatives and interventions. It is so because, with education, comes immense economic dividend such as; good jobs and good salaries for citizens, competent educated workforce and smart citizenry who are catalysts for positive change and development. It is thus not surprising to note that in Ghana, a large chunk of our national budget is consumed by the provision of quality education.

Needless to say, governments have also had to grapple with paying for the numerous infrastructure deficits, not to talk of recurrent expenditure on emoluments and compensations of teachers, and goods and service for running schools among others. We are told that the British colonial administration in the Gold Coast was derelict in even making basic education free, because at the time it was not free in the imperial Kingdom. Also in Ghana, most of the governments we have had have looked on

whilst many children stayed out of high school for lack of accessibility or better still affordability. This is particularly so in southern Ghana, where boarding fee was a barrier to access, given that most senior high schools in Ghana are boarding schools.

The good old John Agyekum Kuffour (JAK) having actualized the true meaning of Free Compulsory Universal Basic Education (FCUBE), it was only reasonable Nana Akufo-Addo made a promise of free senior high school education. But his opponents bastardized the idea, and said it was impossible. ‘It is next to impossibility’, ‘hopelessly unrealistic’, ‘possible in 20 years’ they said. They vilified him, and asserted it was a seductive political announcement, designed to win votes from willing mass of gullible people. But Akufo-Addo maintained that the 21st century is an era of knowledge, and the-much-sought-after-knowledge is what fuels modern civilization, not Gold and timber, or even our toddling hydrocarbons industry.

By some unlucky accident, the NPP candidate was not successful in the second round of election in 2008, despite having led in the first round of election by a higher margin than the eventual winner garnered in the second round, with just a narrow majority. And this coincidence of error was the time Ghana retrogressed. The trail of destruction was all over; the public purse saw the worst desecration. As it turned out, the NDC was incapable of responding to the needs of the ordinary Ghanaian. And high school education became for a selfish club of the rich and capable. No wonder that high school boarding education became more expensive than undergraduate studies; an emotional comparison by most parents.

Nana Akufo-Addo was a true believer of winning the presidency for his vision of free SHS to be brought to pass. A true believer as he was, he doubled down on his promise in 2012 and 2016 to deliver the free senior high school for all Ghanaian children. And thus far the NPP under him, has consistently promised the Ghanaian people Free SHS in three consecutive elections (manifestos). The 2016 manifesto clearly states, the NPP ‘will redefine basic education to include Senior High School (SHS), covering vocational, agriculture and technical schools, and make it available for free on universal basis to all Ghanaians’. After eight years of opposition, when eventually the mandate was entrusted it in 2016, the NPP did not hesitate to implement same.

Immediately after the inauguration of the president, his opponents, in self-flattery turned their own speculations into nationwide rumour of how our programs would be destined for a spectacular failure. But we see in Akufo-Addo (and the intellectual excellence of top crop of his ministers), a leadership that endeavors to take bold innovations that would ensure eternal legacies for generations yet unborn. And with each passing day, they got disappointed as his government dispelled their doubts. For instance, in 2017 there was a 10% increase in budget allocation to the education sector. The increments were largely caused by two main drivers; free SHS and Restoration of teacher and nursing trainees’ allowance.

Government spends GH₵2,312 on each of the 1,264,000 SHS student currently under the policy per year. And a total of GH₵693m has been paid since the restoration of allowances for teacher and nursing trainees in 2017. These social protection policies have put money in peoples’ pockets, as the finance minister has said. Government has also recruited 66,357 teachers according to the Director-General of G.E.S. There is a revamp of classroom blocks and ancillary facilities across all double track schools in Ghana today. These and many more have sent cold shivers down the spines of the members of the largest opposition party and its flagbearer.

Waking up to the realization or the reality of free SHS, now in a face-saving move, John Mahama who ridiculed free SHS is all of a sudden in town promising TVET for free at all levels. This same man was somewhat indifferent when parents struggled to pay for their ward’s fees whiles he and his henchmen plundered the nation’s resources with pedigree. The most stinging indictment is when this individual once remarked that, very soon Akufo-Addo would be promising free air, as free education which the then-candidate promised in his view is a constitutional requirement. But his courage had failed him. And yet his so called progressively free policy was a convenient excuse to deny the rest of the country’s children their birth-right, what he had benefited personally as a boy in northern Ghana.

Now bereft of confidence to win the 2020 election, he makes the most absurd suggestion to cancel the licensure exams for teachers. Well he said, among other vain talks, that he would abolish double track through massive infrastructure as if buildings are like tomatoes to be acquired every day at the Mala Atta market. Even more comical is the promise to review the entire free SHS policy, which Ghanaians see could well be a subterfuge, devoid of any truth. This clearly is a kneejerk reaction to the thriving free SHS policy which has taken the wind out of the sail of John Dramani Mahama. The Akans say, ‘se ﬤkwatrekwa se ﬤbema wo ntoma a, tie ne din’, to wit if a person who is naked promise you a cloth to put on, just listen to his name.

In fact, the 2016 manifesto of John Mahama campaign did not have education as a focus. The main focus is on so called, ‘Putting peoples first, Building a strong economy for job creation, Expanding infrastructure for accelerated development and Advancing transparent and accountable governance’. The bit about education lacked clarity. The flagbearer is quoted as saying; ‘We will continue to take bold initiatives to improve access, affordability and quality at all levels.’ It is expanded into the same things successive governments have been doing from Adam with the same expected outcomes. The text is embellished with rehashed words in the political lexicon as ‘improve’, ‘enhance’, ‘resource’, ‘complete’ and so on. The only pro poor bit is the promise to absorb fully the WASSCE registration fees, which the Akuffo-Addo government having already conceived the idea, only to be plagiarized by the NDC, has implemented same in government.

So, you see my dear reader, Mr. Mahama’s intention for the education sector is without vision and in a realm of murky darkness. His terribly trivial contribution to the sector when he sat on the highest throne in Ghana is not only an air and mark of the betrayal of a northern mandate, but also a visible strangul

Anti-LGBTQI+bill not to engender hatred for persons, meant t...
30 minutes ago

JB’s two phones tendered in as evidence
30 minutes ago