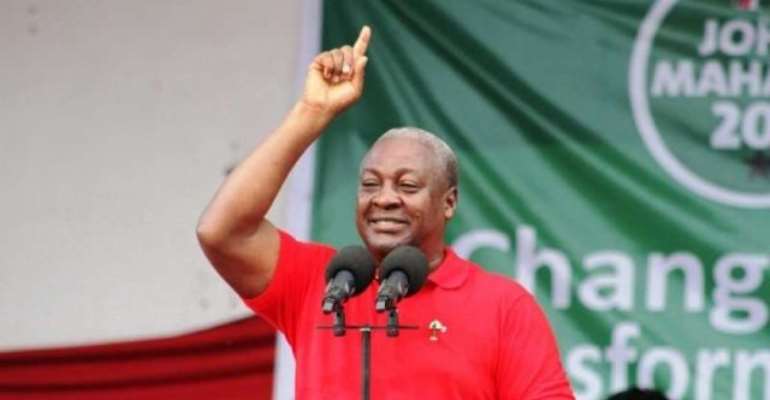 A member of the opposition National Democratic Congress (NDC) communications team, Brogya Genfi says 2020 is the Year of Return of the former President John Dramani Mahama.

He said President Akufo-Addo has failed to grasp the nettle of anger in majority of Ghanaians about his government’s poor performance.

YOU ARE ON YOUR WAY OUT!

It’s the first month of a new year – an election year and a #YearofReturn for President John Mahama to the Executive Office of Ghana for that matter.

I write to draw your attention to the widely held view of most Ghanaians on your exit from the Presidency this year.

Most Ghanaians have entered the new year with hunger and anger on the emptiness of their pockets during the Christmas festivities.

In fact, contractors were among the hardest hit because you falsely claimed and deliberately deceived the entire nation that you have paid them whiles you knew that you were peddling untruths.

Thousands of bankers who lost their source of income due to your poor and super incompetent handling of the banking sector reforms also had a ‘dry' festive season.

Sir, to be blunt, you have failed to grasp the nettle of anger in majority of Ghanaians about your government’s poor performance and their anger is most likely to persist and follow your memory even beyond your exit (from the Presidency) this year.

The saddest aspect of the journey to your exit is that you are completely in denial about the experience of hardship by your people and the negative confidence you exhibit that ‘all is well'.

In other words, Mr President, you totally lack the social intuition to empathize with the masses of the people. A leadership without social intuition is a clear and present danger to the people, in whose interests it is to remove such a leader at the least opportunity.

Your attitude could be gleaned from a recent Tweet by the famous Ghanaian satirist Kwaku Sintim Misa (KSM), “How do you help someone who is CLUELESSLY MESSING UP but CONFIDENT that everything is under CONTROL. It’s called ORGANIZED CHAOS”.

This attitude is akin to a fowl being led to the slaughterhouse yet, walking majestically as though it was going to the feeding house.

Mr President, you are on your way out - without a doubt. At least, we those who aren’t living on cloud nine can clearly foresee it!

Interestingly, you appear to think that because President John Mahama was voted out in 2016, his return to the Presidency is merely impossible notwithstanding the abysmal performance of your reign.

Really, you think so? Is this that warped logic which motivated you to recently retort at the NPP National Conference, “What is Mahama coming back to do?”

Mr President, there are many things you are handling poorly which Ghanaians know President Mahama will do better and with their interest at heart. In any case, your kinsmen say “sankofa yenkyiri” to wit “going back on something is not forbidden”.

Firstly, you promised to run a “lean government instead of a lean kenkey” yet you currently operate the most obese government on Earth. Appointing over 120 Ministers of State and thousands of Presidential staffers is your most ridiculed action in most homes in Ghana. You have appointed a Minister of State at the office of the Senior Minister (whatever that means).

President John Mahama has promised to reduce your oversized Ministerial portfolios by 40 – will you still ask what he is coming back to do?

Again, you promised to build 350 new Senior High Schools in your first term of office. This is your final year in office and you have disappointedly built none. Your refusal to complete all the Mahama Community Senior High Schools and not building any has shifted our regular Senior High School schedule into a strange distorted Double-Track system.

President John Mahama has clearly assured the Nation he will complete all the abandoned Community Senior High Schools and abolish the dreaded Double-Track system. Will you still ask what he’s coming back to do?

Sir, on the welfare and condition of the Ghanaian Teacher, you said they were suffering and promised to continue the payment of all arrears owed them in your early stay in office. Today, Teachers are worse off than before your reign. Your bad economic policies have eroded the capacity of their take-home pay.

In fact, you have not just ignored their arrears, you have also introduced a wicked Licensure Examination which never existed before you were sworn into office. President John Mahama has given his sincerest word to cancel

this unnecessary Licensure Examination. Sir, will you still ask what he is coming back to do?

Your promoters have projected you as a strong advocate for human rights and free speech. The cold-blooded murder of the late promising Journalist Ahmed Suale is a blot on your supposed credentials.

Your government has closed down almost all dissenting media outlets and many Journalists have openly expressed fear of practising under your regime. Sadly, Ahmed Suale was killed after undertaking an investigative work which exposed people in your government and their affiliates.

As part of your grand scheme to increase the cost of “free speech”, you have increased Talk Tax by a whopping 50% - President John Mahama is sure on scraping that increment when elected. Will you still ask what he is coming back to do?

Mr President, there are several policy corrections with your administration and since you think all is well, President John Mahama must come back.

Your exit is confirmed by the results of polls conducted by even civil society groups sympathetic to your government such as IMANI Africa which has failed your government in their recent assessment, giving you 48/100.

More importantly, the Centre for Democratic Development (CDD) reported that 59% of Ghanaians surveyed say your government is moving in the wrong direction.

To nail it all, the ‘President of the Streets', musician Shata Wale will consider 15/100 as the genuine assessment of your government’s performance.

Respectfully Sir, your administration has not been worth the election outcome of 2016.

The verdict is clear and loud now; You MUST go! Whoever comes after you will not be by your dictates. It is the decision Ghanaians will make on the 7th December 2020.

Once again, I wish you a Happy New year and wish for a violence-free exit of your administration this year.