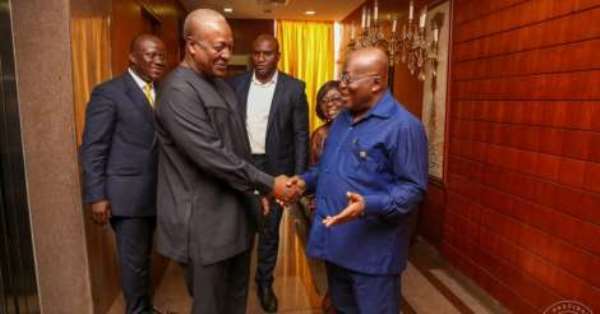 As far as I have been able to ascertain, it was former President John Dramani Mahama, with his inexcusably scandalous “Akonfem” (Guinea-Fowl) mega-fraud, that did the most irreparably criminal damage to the development of the poultry industry in the northern-half of the country, and not President Addo Dankwa Akufo-Addo’s progressive policy agenda of “One Village, One Dam” that was intended to reduce the importation of tomatoes from Burkina Faso. Whether this progressive policy initiative would have met its objective by February 2020, when it comes up for review and evaluation by the Presidency, I presume, is decidedly beside the point. Even if this project is deemed not to have fully achieved some of its laudable goals, it would still have definitely been worth the effort, unlike the Guinea-Fowl Affair, which was simply another of Mr. Mahama’s corrupt diversionary tactics to criminally cream the Ghanaian taxpayer and our National Treasury.

On the latter count, we may aptly ask Mr. Toobu the following: What is so humbling about a genuinely intended and well-targeted project that falls well short of its target, as opposed to another that was just initiated as a ruse to rob the Ghanaian taxpayer of his/her scarce and hard-earned fiscal resources? Indeed, it is quite curious to realize that Supt. Toobu may be a pathological sadist who gloats in the wicked and thievish policies of former President John Dramani Mahama. And, by the way, the catastrophic collapse of the country’s banking system must squarely be credited to the abjectly poor managerial skills of the Mahama Posse / Gang, rather than its necessary cleanup and the resultant unemployment which, by the way, far pales in significance and magnitude when critically and objectively compared with four-and-half years of Dumsor, the perennially erratic supply of electricity under Mr. Mahama’s tenure, being blamed on the key economic operatives of the Akufo-Addo-led government of the New Patriotic Party.

Estimates regarding the level of unemployment or layoffs from the cleanup of the banking mess left his successor by former President Mahama range between 2,500 to 4,000 at the most liberal maximum, whereas the magnitude of labor layoffs or the unemployment levels precipitated by Dumsor-induced collapse of both public and private enterprises range in the hundreds of thousands. Perhaps it is between 300,000 and 500,000. This is where the Government’s Statistician needs to be up and running. And, of course, this aspect of the supervision of the wanton destruction of the country’s economy by the previous Mahama regime needs to be put at the front and center of the 2020 Akufo-Addo/Bawumia electioneering campaign agenda and platform. Ghanaians need to fully appreciate in the simplest of terms, precisely why the banking collapse took the turn and the magnitude that it did and, even more significantly, why the Akufo-Addo government was the far better off and responsive and responsible in the way and manner in which this very complex modern-world phenomenon was handled by the genius likes of Gov. Ernest Addison, of the Bank of Ghana, and Mr. Kenneth Ofori-Atta, the Minister for Finance and Economic Planning.

Supt. Toobu woefully fails to explain to his readers what the critic means by Gov. Addison’s having supposedly failed to “contextualize his strategies in his effort to cleanse the Banking sector,” so we can only wonder whether if, indeed, Mr. Toobu was richly endowed with such highly specialized knowledge, precisely why the critic had not quickly and opportunely stepped up to the proverbial plate in order to provide the Mahama Posse with the requisite assistance. I also have absolutely no doubt that there were more than several missed targets in the implementation of the “One District, One Factory” policy initiative. But, of course, we also promptly need to underscore the fact that warts and all, still the implementation of the “One District, One Factory” project was far better executed than the so-called E-Block Senior High School Construction Project. Not that any studious observer expected such massive failure on the part of the previous Mahama-led regime of the National Democratic Congress to have been diametrically opposite of what really happened.

I mean, a politician who is adamantly averse to a fee-free universal access to high school education could really not have been expected to have “achieved” the sort of massive failure that Mr. Mahama’s so-called E-Block Project registered. It goes without saying that many of us staunch supporters, members and sympathizers of the New Patriotic Party are generally not very satisfied with the pace of the execution of the development projects and the broader agenda of Messrs. Akufo-Addo and Bawumia. But this is largely because many of us are too impatient to appreciate the enormity of the magnitude of the developmental stasis that the leaders of the National Democratic Congress had presided over for the nearly a decade before President Akufo-Addo and Vice-President Bawumia assumed the democratic reins of governance in an electoral landslide in January 2017.

If we did, we would actually marvel at the lightning pace of the execution of development projects by the present administration all over the country. I mean, one cannot legitimately talk about “One District, One Factory,” unless one is also old and mature enough to remember the apocalyptic destruction of the Nkrumah-established Ghana Industrial Holdings Corporation (GIHOC), comprised of some 108 factories, that was summarily liquidated by the Rawlings-led half-junta Provisional National Defense Council (PNDC), with the calculatedly vicious and systematic guidance of some neocolonialist operatives of the IMF and the World Bank in the specious name of a Structural Adjustment Program (SAP), which simply meant “Let’s put these uppity Niggers back in their traditional place in the heart of the Amazon Jungle.”