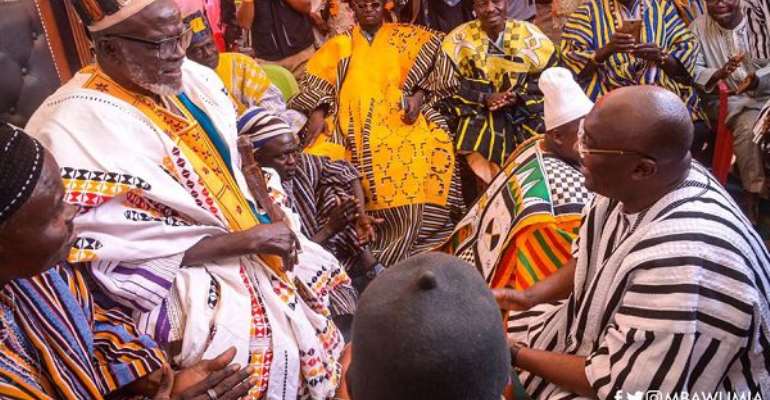 The chiefs and the people of the Kusaug Traditional Area in the Upper East Region climaxed this year’s Samanpiid Festival with a durbar attended by the mighty and the high in Bawku last Saturday.

Vice-President Dr Mahamudu Bawumia and former President John Mahama were among the distinguished guests who graced the occasion.

The Asantehene’s Sumankwahene, Baffour Asabre Kogyawoasu Ababio III, also led a delegation from the Asante Kingdom to witness the festival.

The 32nd Samanpiid Festival, which showcased the rich cultural heritage of the chiefs and people of the traditional area, was characterised by traditional dancing, music, colourful costume and speeches.

The Samanpiid is an annual festival celebrated by the Kusasis in the Kusaug Traditional Area in the Upper East Region to show appreciation to God for a bumper harvest.

It was first celebrated in 1987.
This year's festival was on the theme: “Harnessing the economic, social and cultural heritage for the development of Kusaug".

Sustenance of peace
The Vice-President expressed appreciation to the people for the prevailing peace in the area and urged them to work hard to sustain it for accelerated development.

He charged the Bawku Inter-Ethnic Peace Committee and other stakeholders to ensure that Bawku “does not return to the dark days of conflict”.

“It is gratifying to note that Bawku is back, and I will entreat the Inter-Ethnic Peace Committee to continue working together to promote lasting peace in the area," Dr Bawumia added.

He, therefore, entreated the people to be patient, since the government was making efforts at addressing their development challenges.

He observed that the main challenge facing the north was poverty, underpinned by the lack of infrastructure and human resource, and explained that it was for that reason that the government had rolled out various interventions, including the free senior high school policy in 2017, to bridge the development gap between the north and the south.

Dr Bawumia said with enrolment in SHS going up by 69 per cent within three years of the policy, the government acknowledged the fact that it had to build more school infrastructure to cater for the increasing enrolment figures and move away from the double-track system to a single track.

On agriculture, he said 206,204 farmers benefitted from the fertiliser subsidy component of the Planting for Food and Jobs programme in the Upper East Region, adding that there was also an increase in maize yield from 46,000 tonnes in 2017 to 152,000 tonnes in 2019.

On behalf of the government, the Vice-President donated GH¢20,000 and 100 cartons of assorted drinks towards the festival.

He also donated GH¢10,000 to the Bawku Education Endowment Fund.

Conflict
The Paramount Chief of Bawku, Naba Asigri Abugrago Azoka II, observed that “ever since our senseless conflict ended years ago, we have based our priority on the healing of wounds and the mending of fences in broken relationships; it is now time to embark on a vigorous pursuit of the economic and social development of our people”.

He commended the government for the continuation of work on the Bolgatanga-Bawku-Pulmakom road, saying: “I hope it will continue unabated to its final conclusion.”

Naba Azoka said he was not ready to cede any part of his traditional area to another country and assured the government that the area was not part of any secessionist group and that the people were not interested in splitting the traditional area between two states.

He appealed to the government to strengthen security in the Bawku area, saying: “We share common borders with Togo and Burkina Faso, and we could be targets of attacks.”

The Bawku Naba further called for the creation of a new administrative district in the Bawku West area, the development of tree crop plantations, the construction of warehouses and the reversal of the name of the Bawku SHS back to Azoka SHS.