Ahead Of 2020 Elections: PPP Opens Nominations 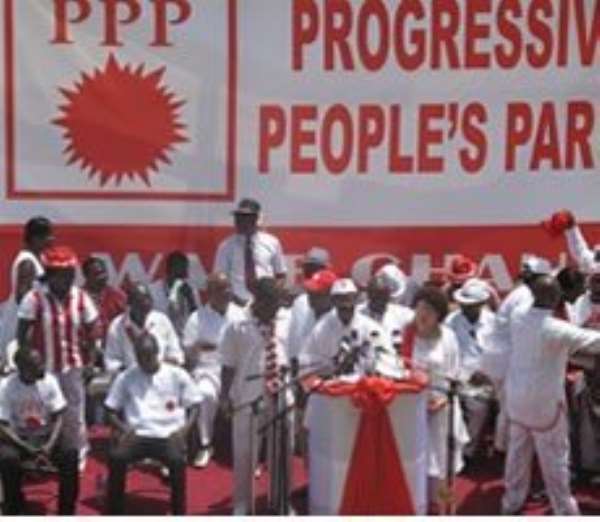 Ahead of Ghana's December General Elections, one of the opposition parties, the Progressive People’s Party (PPP) has opened nominations to fill vacant political leadership positions.

The PPP, led by its National Executive Committee, is calling on all constituency and regional offices to open nominations to interested persons.

The directive, which also applies to constituencies without parliamentary candidates as of December 24, 2019, further provides details for the nominations and conduct of national executive elections and also presidential elections.

A statement signed by the National Secretary of the party, Mr. Murtala Mohammed, said nominations for constituency positions would open on January 13 and end on January 24, 2020, with January 30, 2020 set as the date for the elections

At the constituency level, the party has fixed GH¢50 as nomination fee for those seeking the position of chairman while those for vice-chairman, secretary, treasurer, and organiser will pay GH¢40 each with all other candidates paying GH¢20.

It said all forms were to be filled at the constituency offices.

At the regional level, it said, the opening of nominations would commence on January 13 and end on January 24, 2020 with the regional elections set for February 1, 2020.

It said nominations for the national executive positions would begin on February 17 and end on March 20 while the elections would come off on April 4, 2020.

For the regional positions, it said, while the filing fee for the position of chairman was GH¢100, that of the vice, secretary, treasurer, and organiser would go for GH¢80 while all other regional positions would also go for Gh¢40.

The fees, it said, should be paid at the regional offices.

The statement said candidates seeking for the position of national chairman would pay Gh¢4,000 while the vice, secretary, treasurer, and organiser would pay GH¢2,000 as filing fees to be filed at the party headquarters at Kokomemle in Accra.

The statement said aspirants seeking to be parliamentary candidates on the ticket of the party have between January 13 and January 31, 2020, to pick and submit their forms while February 15, 2020, had been set for the elections.

Those seeking to be parliamentary candidates will pay GH¢100 to pick up the forms and subsequently pay GH¢2,000 as filing fees at the constituency offices or with the constituency chairman.

On presidential election, it said, nominations would open on February 17 and end on March 20, 2020, while the national convention to elect the presidential candidate had been fixed for April 4, 2020.

It said those seeking to be presidential candidates would pay GH¢ 1,000 for the nomination forms and pay GH¢10,000 as filing fees at the National Headquarters at Kokomemle.

“All fees payable to the National Account should be paid to MTN Mobile Money Number 0249244065 or MOMO Pay to MTN Code 600969 or GT Bank Account number 201118292110 with the pay-in-slip attached to the form or transaction number written on the form when submitting,” it advised.

The statement said all nomination forms could be obtained from the relevant constituency offices or be downloaded from www.PPPGhana.org and upon completion returned to the appropriate office with the proof of payment of appropriate fees.