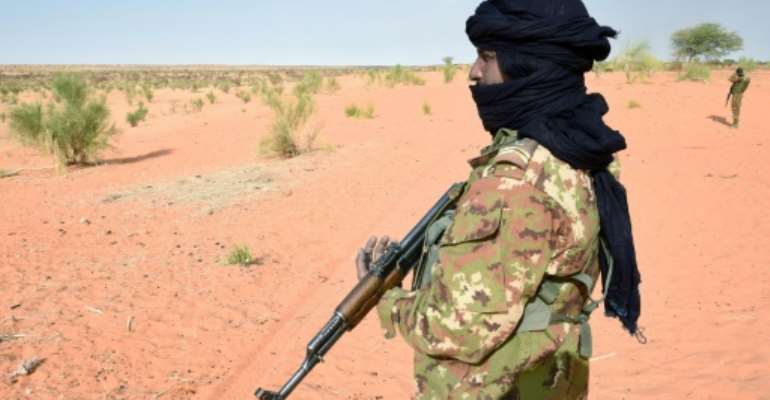 A Malian soldier patrols with French soldiers involved in the regional anti-insurgent Operation Barkhane in 2016 in Timbamogoye, Mali. By PASCAL GUYOT (AFP/File)

Guterres emphasized that "uncertainty prevails," in a quarterly report on Mali, which was distributed to members of the UN Security Council and seen by AFP on Thursday.

The uncertainty, he said, follows the dialogue process which included calls for new elections but failed to create a clear path forward for the country, especially as opposition groups boycotted the initiative.

Mali is undergoing a grueling jihadist conflict, in which violence has spread from the north to the center of the country, claiming thousands of lives.

A 2015 peace agreement was meant to disarm rebel groups and integrate them into the national army. However, the initiative is mostly gathering dust.

"The further deterioration of the security situation in Mali and the wider Sahel region is alarming," Guterres said.

"Terrorist groups are gaining ground, while attacks against the national and international security forces continue unabated," he said.

"I am concerned about the continued delays in the implementation of the Peace Agreement, in the context of the inclusive national dialogue and growing insecurity across the country," Guterres added.

Fatalities in the Malian army increased 116 percent between October and December compared to the previous three months, according to the report, which said 193 individuals had died.

Meanwhile 68 attacks against the UN mission occurred during the same period, compared to 20 in the previous three months.

But in a display of how deep the fracture runs, most opposition groups in the country snubbed the exercise, citing distrust of the president.

The talks concluded with recommendations to hold parliamentary elections before May and to revise the constitution.

Parliamentary elections were meant to be held several times over the past year but were postponed for security reasons.

Likewise, elements of the constitution need to be amended in order to fully implement the 2015 peace accord between Bamako and armed groups.