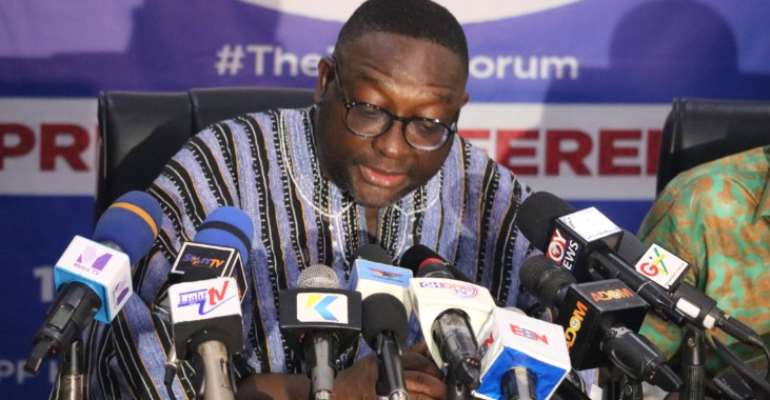 The governing New Patriotic Party (NPP) has downplayed suggestions that the timing and organization of its parliamentary primaries in April 2020 may badly affect its fortunes in the general elections.

The Economist Intelligence Unit (EIU) in its latest report predicted an NPP victory in election 2020 but warned that the party’s decision to organize outstanding parliamentary primaries in its strongholds in April 2020 will allow it less time than the NDC to calm the ructions often associated with such internal contests.

But the party's Director of Communication, Yaw Buaben Asamoa explained that a lot of planning and considerations were done before settling on the April date.

Speaking to Citi News, he noted that the party will effectively manage any consequential matters.

“The NPP's primaries focused various positions and not just the MPships. It tends to be very combative and heavily participated by aspirants but in all ways, because we have a strong democratic culture in the party, we've always managed the processes well.”

“So we are preparing and we know, it is on our strategic needs as a party in government, that the timing for the primaries was appropriate. We will deal with any issue that come over except that we believe that in the interest of the party, members who seek that we remain in government will conduct themselves well,” he noted.

The Economic Intelligence Unit (EIU) had earlier predicted another win for the New Patriotic Party (NPP) in the national polls this year.

In its latest report, the unit disclosed that the Akufo-Addo administration is still regarded as a better custodian of the economy compared to the opposition leader John Dramani Mahama and will, therefore, be given another four-year term to govern the country.

But on their part, the main opposition NDC has condemned all claims made by the EIU concerning the national polls.

According to Peter Otokunor, a Deputy General Secretary of the party, there would be 'a change of government' in the polls.

“There will be an obvious change in government. The NDC will be winning the December 7 polls and President Mahama will become the President again. While we look at 2020 with hope, we are not oblivious of the fact that 2019 was that of misery and hardship. People had really gone through tough times”, he told Citi News.

Meanwhile, this is not the first time the business unit has predicted a win for Nana Akufo-Addo's government in the upcoming polls.

In its country report on Ghana released on May 13, 2019, the EIU said it will be difficult for the opposition NDC under former President John Dramani Mahama, to portray itself as the better overseer of Ghana's economy, especially as the country's growth outlook looks fairly strong. NDC needs to work harder

The Member of Parliament for Odododiodio constituency, Nii Lante Vanderpuye on the back of an earlier EIU report released in May said the unit's prediction is a wake-up call for the NDC to work harder.

While acknowledging the importance of the report, Mr. Vanderpuye said the party was not really perturbed about the findings will just work harder to secure victory in the 2020 polls.

The New Patriotic Party will hold its Presidential primaries on April 25, 2020.

A non-refundable nomination fee for aspirants will be GHc20,000 whilst the filing fee is GHc200,000.

The NPP will also be electing the remainder of its parliamentary candidates on the same day.

August 4 declared public holiday in celebration of Founders ...
45 minutes ago