All eyes on Hong Kong as Taiwan prepares for polls 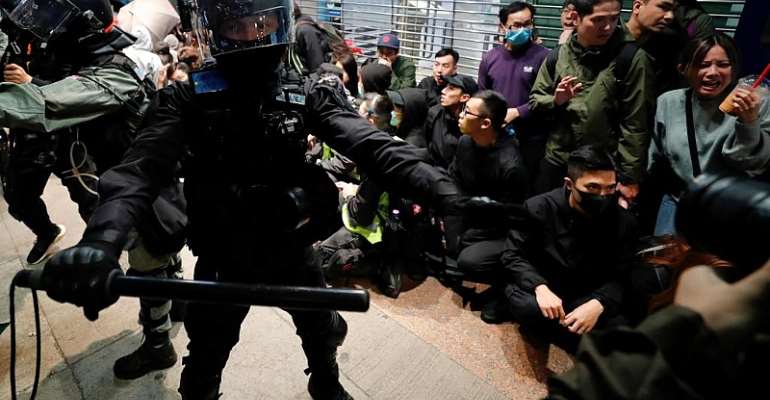 A huge New Year's Day pro-democracy rally in Hong Kong ended in mass arrests and clashes between police and hardcore protesters, as demonstrators sought to carry their movement's momentum into 2020. Taiwan, ten days away from general elections, is closely watching Beijing's handling of the Hong Kong situation.

After a peaceful start, Hong Kong's first demonstration of the decade erupted in violence, with police and masked protesters facing off in several neighbourhoods on the city's main island.

The Civil Human Rights Front, which organised the march, estimated that the numbers participating had surpassed the 1.03 million on 9 June, date of the massive rally that kicked off the protest movement in earnest last year. Hong Kong police said they counted only 60,000 demonstrators, a number described by protest organisers as "too ridiculous".

“People had hoped that, after the particularly violent demonstrations before Christmas, things would calm down,” he says.

But they didn't. The demonstrators still have their "five demands": completely abolish an extradition law that would allow Beijing to deport people from Hong Kong at will; investigate allegations of excessive police violence; stop referring to the demonstrations as “riots”; release anybody arrested in relation to the demonstrations; and organise free elections with universal suffrage.

But Chief Executive Carrie Lam's administration came out with a bland statement over the Christmas and New Year holidays “really not offering to make any concessions at all,” according to Dillion.

Until now, Beijing has not taken an active role, instead resorting to verbally attacking what it calls “illegal riots” that “plunge Hong Kong into chaos”.

“It is extremely fortunate that they haven't intervened directly,” says Dillon.

Mainland policing attitudes
“Had they intervened with military or even harsher policing, I suspect that the situation would have been very much worse, and people remember 4 June 1989, the military action against the democracy demonstrators in Tiananmen Square, and there is a hope that because of that, Beijing will not want to exert force,” he says.

But he noted that Hong Kong police seem to be in more direct contact with Beijing after a new police chief, Chris Tang, was appointed in November.

After Tang's appointment – which was authorized by Beijing's State Council - the new police chief travelled to the Chinese capital, where he met the Minister of Public Security, Zhao Kezhi, Director of the Hong Kong and Macao Affairs Office, Zhang Xiaoming, and the all-powerful Guo Shengkun, a member of the Politburo and director of the Central Committee Political and Legal Affairs Commission.

“Comments that Chris Tang and also junior police officers have made, suggest very strongly that they are getting closer and closer to mainland policing attitudes at the same time that they are becoming more and more alienated from large sections of the Hong Kong population,” observes Dillon.

“People in Taiwan have been watching carefully what has been going on in Hong Kong,” says Dillon, pointing out that Beijing would like to apply the so-called “One Country, Two Systems” policy, that guarantees Hong Kong's capitalist system and a degree of political autonomy, to Taiwan.

But incumbent president Tsai Ing-wen's pro-independence DPP is not likely to be sympathetic to the idea.

Other candidates, such as the Nationalist Kuomintang candidate Han Kuo-yu and the People First contender James Soong may be more enthusiastic about closer relations with Beijing.

“Even if they don't subscribe to applying One Country, Two Systems to Taiwan, they want to move as far away as possible from independence,” says Dillon.

All candidates will keep a close eye on how Beijing deals with Hong Kong, especially regarding promises that voters would be able to elect their Chief Executive by universal suffrage – promises that have not materialised until now.

Bigotry against Muslim students won't be tolerated – Muntaka...
31 minutes ago