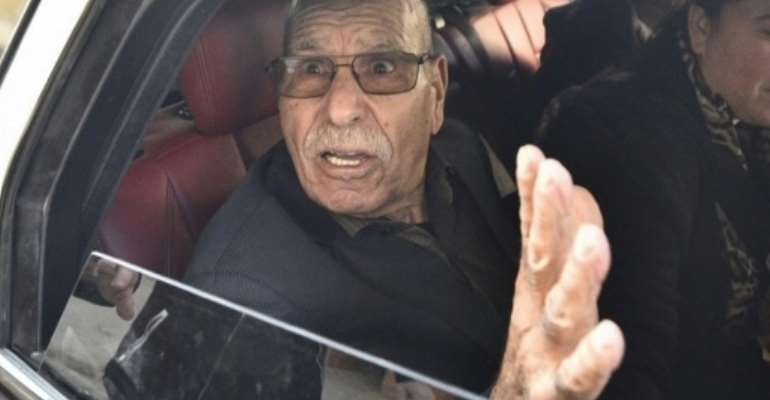 Algerian war veteran Lakhdar Bouregaa was released from prison on Thursday after his arrest last summer during an anti-government demonstration in the capital. By Ryad KRAMDI, RYAD KRAMDI (AFP)

Bouregaa was freed from an Algiers prison where he had been detained for six months, an AFP photographer said.

"His trial, which was due to start this (Thursday) morning, has been postponed and the judge has decided to release him," lawyer Abdelghani Badi said.

Bouregaa, 86, was arrested at his home in Algiers last June for "insulting a state body" and "taking part in a scheme to demoralise the army with the aim of harming the nation's defence".

His supporters attributed his detention to his criticism of army chief Ahmed Gaid Salah, who became Algeria's de facto strongman after the fall of longtime president Abdelaziz Bouteflika last April. Gaid Salah died of a heart attack in December.

Badi said that Bouregaa, who underwent emergency surgery for a hernia during his detention in November, would remain free during his trial, postponed until March 12.

Bouregaa was a commander of the National Liberation Army -- which fought French colonial rule -- and a founder in 1963 of the Front for Socialist Forces, one of Algeria's oldest opposition parties.

Before his arrest, Bouregaa took part in the demonstrations that have rocked Algeria since last February -- initially against Bouteflika, and then the wider establishment, after the president was forced to resign.

Bouregaa's arrest provoked outrage in Algeria, notably from supporters of the "Hirak" protest movement, who branded him a "prisoner of conscience" and demanded his release.

Among other detainees freed on bail Thursday was retired general Hocine Benhadid, according to Kaci Tansaout, head of support group the National Committee for the Liberation of Prisoners.

The 73-year-old was also accused of "demoralising the army" after criticising Gaid Salah.

Abdelhamid Amine, who was sentenced to three months imprisonment for his anti-government cartoons under the pen name "Nime", was released after serving one month, Tansaout said.

About 180 protesters, activists and journalists were arrested ahead of an unpopular presidential election on December 12, many for waving Berber flags at protests or making critical comments online.

Some were acquitted, often after months of pre-trial detention. Another 30 were convicted of "attacking the integrity of the territory" and were recently released after serving six month sentences.

About 140 others remain in prison, either convicted or awaiting judgement.

After a vote marred by low turnout, Abdelmadjid Tebboune was sworn in as Algeria's new president on December 19. A former prime minister who served under Bouteflika, he is seen as an establishment insider.