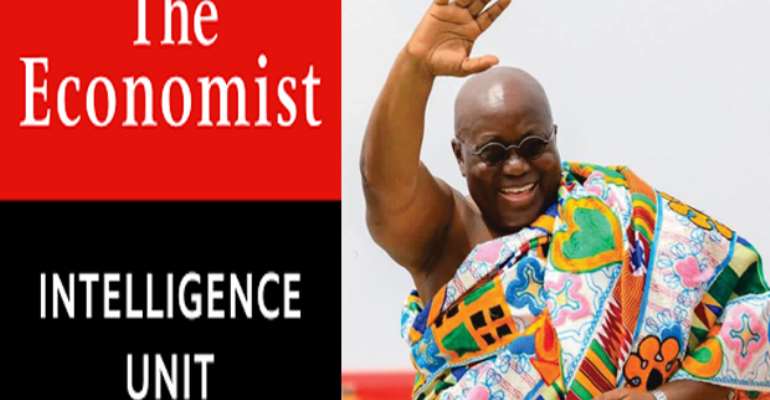 Economic Intelligence Unit has predicted that the Akufo-Addo administration is still regarded as a better custodian of the economy compared to the NDC's Mahama administration. The Unit predicts close contest between the two parties in the coming election with Npp emerging victorious.

I don't know where they conducted their research and their methodologies. But basically, understanding how people experience and feel about their lives provide valuable information for researchers. Africans have our peculiar problems so when measuring performance of our governments, it must be done within the African context. Lack of infrastructure in Africa leaves millions in poverty despite the continent's huge potential. In Ghana, millions of our citizens are still languishing in poverty due to lack of infrastructure. Economists say, if Africa is to unleash its true economic potential, $170 billion is needed every year in infrastructure development. The share of Africa's working age population is rising faster than any other region globally, 70 percent of the populace is under the age 30. It is projected that by 2034, it will have a larger potential workforce than either China or India. Only accelerated infrastructure investment will harness this growth according to the world bank. The world economic forum on Africa report highlighted five interconnected risk impacting countries across the continent. These include unemployment, lack of infrastructure, poor governance, corruption, population growth, insecurity etc etc.

Based on these highlights and the situation of the ordinary Ghanaian under this administration, I will only describe EIU prediction as nothing but the usual baseless predictions about Africa which have proven to be false. The Unit predicted that Buhari's APC will lose the 2019 election and based its reasons on same reasons they mentioned in their report but the APC brutally whipped the PDP in that election. Who said inaccurate and bogus economic figures influence voting decision of the voters in Ghana.

The reality of our situation is that the economy is suffering through a major slow down. Ghanaians are going through serious economic economic challenges. A country's GDP is the money value of all goods and services produced in a given year, net of intermediate inputs. The growth of GDP we know is measured in real term. For this, GDP at current Price is converted into constant prices based on prices in a particular base year. Roughly every decade or so, the base year is moved forward to reflect changing economic structure, relative prices, and better data sources. Usually, such periodic revision lead to marginal expansion of absolute GDP due to better capturing of economic activity but GDP growth rates do not change. In spite of all the tricks this administration has adopted to misinterpret these core economic principles, Ghanaians are complaining bitterly, the economy has slowed. Prices of goods and services are skyrocketing and the UNIT thinks this government is good custodian of the economy? In this part of the world, corruption, economic hardship and infrastructure take center stage in decision making when it comes to elections. Life under the Mahama administration is far far better than under the current administration. Businesses were doing better and made good profits and investments under the Mahama administration. Hope they know how much a gallon of petrol was sold under Mahama and the current Price, the strength of the cedi currently. What Mahama did in terms of infrastructure development is still fresh in the minds of Ghanaians. They see his projects everyday and enjoy the benefits they have brought to the communities. They will compare the corruption allegations they [Npp] levelled against the Mahama administration to the gargantuan corruption going on in this administration. Ghanaians are fed up with the current administration due to the incompetence and unprecedented corruption in Akufo-Addo's presidency, resulting in the hardship Ghanaians are going through. Ghanaians will look at the ravaging hunger, escalating insecurity, with documented killings, violation of human rights, nepotism when casting their votes.

Ghanaians will look at the abandoned hospitals and schools, the reckless spendings by this administration, when making their decisions. The EIU always get it wrong in Africa because- they use their western grown methodologies in doing their predictions and assessments. Mahama achieved all he achieved within four years without huge oil revenue as being enjoyed by this administration. When assessing economic performance of the two administrations, all these facts must be considered. The prices of our export commodities under Mahama vis-à-vis current prices. EIU should also compare unemployment rate under the two administrations and the number of people who have lost their jobs under this administration, the number of collapsed businesses. These are the critical issues EIU must rely on when making their predictions.