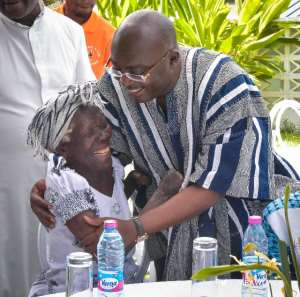 Vice President Dr Mahamudu Bawumia has guaranteed the vulnerable and needy people in society of government’s dedication to improving their standard of living.

"The role of a responsible government is to protect the poor and vulnerable, and the Government of President Akufo-Addo has not been remiss in this manner”, he stated.

Speaking at the second edition of the festive celebration he initiated last year, he cited key policies that are being implemented to make the promise a reality.

In attendance at the event were cured lepers drawn from Cape Coast and Weija Leprosariums, and the street children from the Soup Kitchen run by the Christ the King Church which the Vice President personally served them.

Speaking further, Dr Bawumia revealed that plans are underway to construct a hostel and school for street kids to be managed by the Catholic Church.

"This government is committed to making life better for you. We will not abandon you to your fate. You can count on us," he assured them.

Chairman of the Lepers Aid Committee, Rev Fr Andrew Campbell, expressed appreciation to the Vice President and his family for the humanitarian gesture, which has brought smiles to the faces of the underprivileged.

He also thanked the Vice President for donating 300 bags of rice to the Lepers on Christmas Day.

"We are most grateful to your Excellency and your family for remembering us during this festive season. May God continue to bless you" Rev Fr Campbell said.