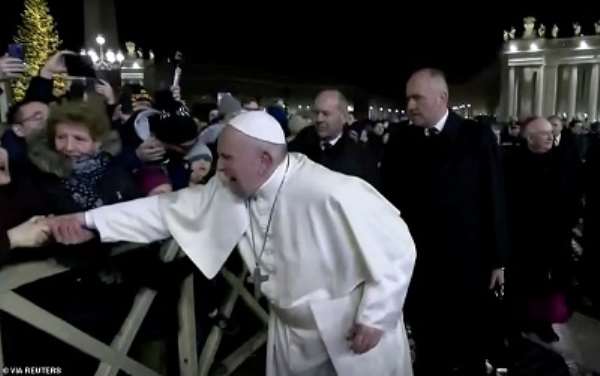 Pope Francis has apologised for slapping a woman who had grabbed him as he greeted a crowd of devotees - shortly before he delivered a speech denouncing 'every form of violence against women.'

The image of a visibly annoyed Francis slapping his way free from the clutches of an admirer as he walked by Catholic faithful on New Year's Eve instantly went viral on social media.

'It happens to me too. I apologise for the bad example given yesterday,' the head of the Catholic church said before celebrating Mass at the Vatican.

Twitter enthusiasts commented with abandon on the pontiff's prompt riposte to the woman.

The day after the incident, the Pope decried violence against women in a speech at the Vatican, saying that it is like profaning God. He contended that if we want a better world in the new year, we should treat women with dignity. He added that involving women in decision-making is key to making humanity more peaceful and united.

In his homily during Mass in St. Peter's Basilica, Francis decried 'how many times women's bodies are sacrificed on the profane altar of advertisements, of profit, of pornography.' He lamented that while women are in his words 'the sources of life,' they are continually offended, beaten, raped, forced into prostitution' or forced to have abortions.

Francis praised women as 'donors and mediators of peace,' and urged that they should become 'fully associated' with decision-making in order to make the world more united and at peace.

In his remarks, Francis didn't mention prejudice against women in the Catholic church. According to Vatican teaching, women can't become priests. Some conservative elements of the Catholic church also are scandalized by parishes that allow girls to be altar servers.

A visibly indignant Pope Francis had to pull himself away from a woman in a crowd in St Peter's Square yesterday evening after she grabbed his hand and yanked him towards her.

Pope Francis was walking through St Peter's Square in Vatican City and greeting pilgrims on his way to see the large Nativity scene set up in the huge, cobbled esplanade.

After reaching out to touch a child, the pope turned away from the crowd only for a nearby woman to seize his hand and pull her towards him. The abrupt gesture appeared to cause him pain and Francis swiftly wrenched his hand free.

The woman had made the sign of the cross as the pope had approached. It was not clear what she was saying as she subsequently tugged him towards her.

The 83-year-old pope grimaced before managing to break free by slapping her hand twice.

He continued his tour, walking with some difficulty while maintaining a slightly greater distance from visitors, and gradually relaxed again as he came into contact with other children.

Apart from the brief upset, Pope Francis' stroll delighted most tourists and Romans.

Shouts of 'Pope! Pope!' and 'Happy New Year!' resounded as families rushed to catch a glimpse of him or thrust out their infant in hopes he would pat their heads or pinch their cheeks.

Since becoming pontiff in 2013, Francis has preached openness - a reform-minded agenda that has irritated a small but vocal group of ultra-conservatives in the church.

Watch the video of the incident below;