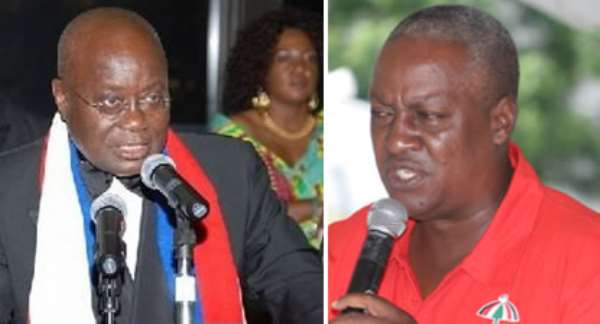 He said he had been troubled in his sleep, so he woke up one night and decided to fire off a short missive captioned “Mr. President, You Have Failed” (Modernghana.com 12/27/19). This is rather funny because just a little over three years ago, Retired Superintendent of Police Peter L. Toobu would have woken up to stygian darkness and may not have been able to locate the entrance to his living room, let alone that of his bathroom or toilet, much less be able to grab a pen or a writing pad or even turn on his PC or laptop to think of composing his missive or, rather, open-letter to President Addo Dankwa Akufo-Addo, unarguably the most progressive and visionary leader of Ghana’s Fourth Republic.

The critic, who recently vacated the employ of the Ghana Police Service (GPS) and as the clerical right-hand man to former Inspector-General of the Ghana Police Service (IGP), Mr. David Asante-Apeatu, to gun for a parliamentary seat in the Upper-West Region on the ticket of the John Dramani Mahama-led National Democratic Congress (NDC), says that then-Candidate Addo Dankwa Akufo-Addo had earnestly pleaded with Ghanaian voters, including the critic, in the leadup to the 2016 General Election, I presume, to try him for a change and failed miserably. Now, this is a very scandalous story to relate about the man who put more Ghanaian youths into our elementary and high schools than any other leader in our beloved country’s 62-year postcolonial history, including, you guessed right, Dear Reader, former President John Dramani Mahama and his so-called National Democratic Congress kleptocratic political juggernaut.

Supt. Toobu also conveniently fails to tell his readers that before Nana Akufo-Addo earnestly pleaded with Ghanaian voters to try him at the Presidency, in the leadup to the 2016 Presidential Election, by the very credible testimony of the dynastic General-Secretary of the present main-opposition National Democratic Congress, Mr. Johnson Asiedu-Nketia, then-Interim President John Dramani Mahama had used crude Rawlings-inspired communist tactics to criminally and savagely rob then-Candidate Addo Dankwa Akufo-Addo of the latter’s glaring victory at the polls.

The wiry-framed man, who is also popularly known to most Ghanaians as General Mosquito, would also sheepishly accuse polling agents, observers and assigns of the former Attorney-General and Minister of Justice of having literally slept on the job, chucked caution to the wind, as it were, to scandalously ensure that a grossly underqualified and, subsequently, proven pathologically incompetent Mr. John Dramani Mahama would substantively accede to the grotesquely oversized mantle and portfolio of President of the Sovereign Democratic Republic of Ghana and the Commander-in-Chief of the Ghana Armed Forces.

Then again, Supt. Toobu claims that President Akufo-Addo has expended some GHȻ 62 Million traveling around the globe during the first nine months of last year, that is, 2019 alone; but as was to be expected of this mischief-making critic, Supt. Toobu conveniently fails to tell his audience precisely how much his own self-styled “North Star” political idol, Mr. John Dramani Mahama, had spent about the same period into his tenure, that is, by the close of 2015, in overseas travel expenditures, including secretly negotiating with some operatives of the erstwhile Obama Administration, in the United States of America, on the blind side of Ghana’s Parliament, for the resettlement of the two Guantanamo Bay, Cuba-imprisoned suspected terrorists. This is what experts of rhetoric and argumentation call “sophistry” or “disingenuousness.”

You see, Dear Reader, the elementary logic here is that if Supt. Toobu neglects the fact that when the exponentially high inflationary rate during the period under discussion is frankly factored into the equation, somehow, Ghanaians would discover to their utter horror and immitigable disgust that, in fact, about this time into his tenure as Ghana’s President, Mr. John Dramani Mahama had spent nearly twice as much as the GHȻ 62 Million that is presently being chalked against the name of Nana Akufo-Addo, it would not make for a good electioneering campaign spiel. Balance their respective travel expenses against the benefits of the same that accrued to the nation or the hardworking but woefully underpaid Ghanaian worker, in both the long and the short term, and it obviously becomes clear that it was, indeed, the much younger and scandalously underperforming and megalomaniacal President Mahama who literally took the Ghanaian electorate and the taxpayer to the cleaners, in classical New York City parlance.

The fact of the matter is that former President Mahama shamelessly fleeced the Ghanaian taxpayer and our National Treasury, whereas President Addo Dankwa Akufo-Addo has been very busy working around the clock and admirably attempting to restore Ghanaian nurses and teachers to the dignified status of their enviable pedestal in Ghanaian society and the global community at large. Now, let the Dear Reader tell Supt. Toobu which of our last two Fourth-Republican presidents seems more like the sort of professional and functional failure that the equally politically overambitious Supt. Toobu would have his countrymen and women believe.