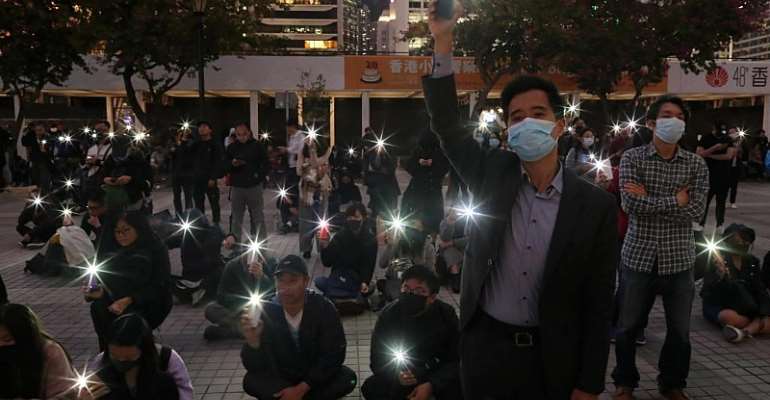 Tens of thousands of pro-democracy marchers filled the streets of Hong Kong for a massive rally on New Year's Day as police and hardcore demonstrators faced off once again in a continuation of almost seven months of often-violent unrest.

Despite a peaceful start on Wednesday, violence erupted near the march as it proceeded through the Wan Chai district on Hong Kong Island. Riot police used pepper spray and tear gas, while hardcore protesters threw Molotov cocktails.

The Civil Human Rights Front, the umbrella group responsible for organising most of the protests, had permission for the march from city authorities, but they were ordered to end it soon after the clashes began.

"The police have... asked us to dismiss the rally," the organisers told marchers using megaphones. "Please calmly and slowly leave the scene right now."

Black-clad, masked protesters also gathered to set up makeshift barricades, while some businesses were vandalised in the afternoon.

Mainland press focuses on latest riots
China's mainland press reported extensively on the latest riots. "Radicals go on the rampage during New Year Day's March," is the headline in the English-language China Daily.

The same paper also publishes a video featuring clashes between demonstrators and the police under the headline "HK protests: mob rule spreads terror," warning that the city is "sinking into recession" as a result of the unrest.

Meanwhile the official People's Daily quoted the New Year speech of Chinese Communist Party leader Xi Jinping to the effect that “the situation in Hong Kong has been everybody's concern over the past few months". Xi asked "how can there be a home where people can live and work happily, without a harmonious and stable environment," adding cryptically that “we are not afraid of winds and rains, or any kind of difficulties".

Larger revolt
The unrest in Hong Kong was sparked by a proposal to allow extradition to mainland China, bringing millions out on to the streets in June last year. It has since morphed into a broader revolt against what many fear is Beijing's tightening control.

Despite the continued unrest, China and the Hong Kong administration have refused to give in to most of the protesters' demands, which include fully free elections in the city, an inquiry into alleged police misconduct, and amnesty for the nearly 6,500 people arrested during the demonstrations. The administration did withdraw the extradition law which initially caused the unrest, but when it did, the focus of the protests had already widened too far for the protesters to be satisfied.