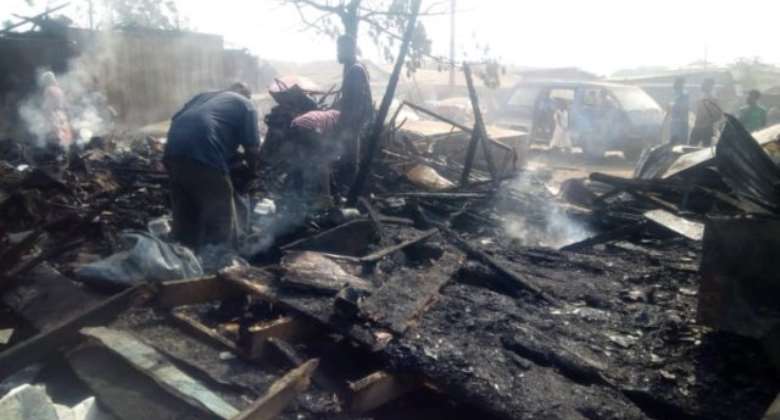 Barely an hour into the New Year, a 74-year-old tailor died untimely in a fire outbreak which consumed his shop at Asamankese in the West Akim Municipality of the Eastern region.

The deceased whose name has only been given as Gyamirah died at about 11 pm on Tuesday evening his daughter Mama Dede disclosed.

She said stated that Mr Gyamirah, “was in his shop when a fire ravaged through a number of wooden structures.”

According to her, at about 11 pm on December 31, 2019, the family of the deceased {who are few kilometres away from the shop} received calls from neighbours that a fire which razed several adjoining shops.

They were unsure whether the fire had affected Mr Gyamirah’s shop.

She said the family arrived at the shop at dawn only to discover that his body has been burnt to ashes. This was after police, who had been called to the scene, managed to retrieve his remains.

Although the cause of the fire has not been established, properties worth tens of thousands of Ghana Cedis is reported to have been destroyed.

The charred body of Mr Gyamirah also has been sent to the Asamankese Government Hospital.

Popularly known as ‘Old Boy’, the late tailor was known to be very good at his job and sometimes worked till very late at night.