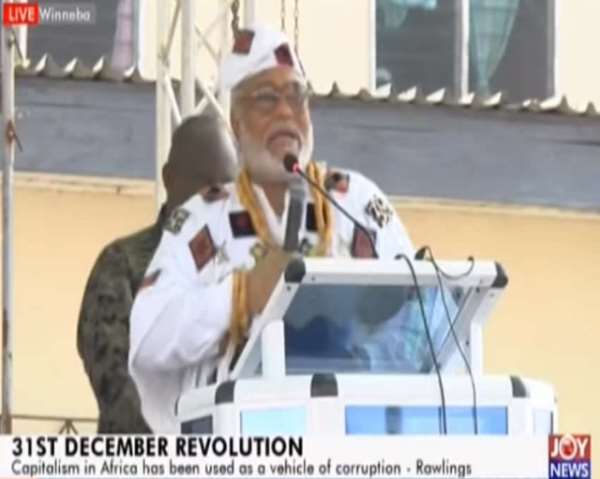 Ex-President Jerry John Rawlings has said the banking sector crippled by massive corruption in 1981 was one of the reasons which made the 31st December revolution necessary.

He said this happened as a result of exploitation by some people who were only interested in their selfish gains.

“The banking sector especially the Ghana Commercial Bank was plunged into unimaginable corruption. The bank served as an avenue for cronies and a particular ethnic group to feed fat on loans without collateral”, he recounted.

In his addresses at the 38th-anniversary celebration of the December revolution, the former President condemned the actions of banks back in the day.

The founder of the National Democratic Congress (NDC) detailed how many people took huge loans without substantial collateral with some even refusing to pay back.

“Not Ghana Commercial Bank, you would think that bank was created for a select few who would take loans and hardly ever pay until the bank will almost become bankrupt, and would have to be refinanced, re-bailed out, recapitalised,” Mr Rawlings lamented.

According to him, one of the good things the late head of state, General Ignatius Kutu Acheampong did was his initiative to battle the prevalent situation by investigating the bank and publishing the names of defaulters.

He decried how a member of the two-man committee he set up was mysteriously killed frustrating efforts to curb the wanton dissipation of the taxpayers' sweat.

“ The two interventions in 1979 and 1981 were not about Rawlings. They were the effects of the mood of the country and the mood of the people. In telling the story, the context and the circumstances cannot be discounted or overlooked”, he urged.

The annual event came off today, December 31, 2019, at the Winneba Lorry Park in the Central region with a durbar of chiefs and people of the town.

Other keynote speakers at the event were the General Secretary of the NDC Johnson Asiedu Nketia and Member of Parliament of Cape Coast, Kweku George Ricketts-Hagan.

Savannah: NADMO to clear buildings on waterways after heavy ...
40 minutes ago