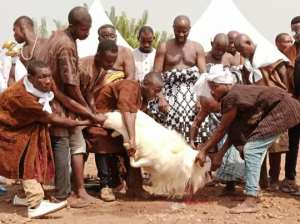 The Dome division of the Asogli State has ended three decades of disagreement over its alignment to the Asogli paramountcy in the Volta Region.

The decision by Togbe Adzie Lakle Howusu XII, Dufia of Dome, in 1989 to go with the political interference that reverted the paramountcy to Ho-Bankoe, divided the community with a faction wanting Dome to maintain its place as warriors of the Asogli State, while the other sought the paramountcy.

Those against Bankoe's paramountcy exhibited open rebellion in diverse ways, including, instituting a separate annual Yam Festival, whiles staying away from all other development engagements of the Asogli State.

“The split wreaked havoc on relations, families, clans and friends. This impeded progress and development in Ho Dome for a long time. The Dynamism and Glory of Ho Dome was lost,” Togbe Howusu lamented at a durbar held to climax the unification process, preceded by several months of mediation.

He said several attempts at unification were undertaken by groups and individuals but with minimal success until few years ago when the community, “on its own accord” decided to resolve the impasse, and jointly produced and undertook a memorandum of understanding in July 2019.

Togbe Howusu, also the “Awafiaga” of Asogli State commended members of the “seven-seven” group, drawn from both sides of the Dome divide, for investing “patience, time, energy and resources” in the quest for unity.

“It is my prayer that, this should be the last of such unfortunate incidents in Ho Dome. And any individual or group of people who would attempt to foment any trouble again in the future shall be exposed by the peace loving people in the community and also resist such negative tendencies in order not to send Ho Dome back to the dark old days,” he said.

Togbe Afede XIV, Agbogbomefia of Asogli who was the special guest of honour, called for support from the people for the development of the State.

“We have been planning for this day but we did not expect it to happen today. I am happy that when I call, chiefs would respond, and children would also respond. I am looking forward to a greater, united yam festival, unprecedented,” he said.

Togbe Afede, also President of the National House of Chiefs, called on the people of Dome to rally behind Togbe Howusu, and also appealed to the various Asogli divisions to work together in developing Ho.

“Peace promotes unity, and therefore unity is stalled when people work against peace. Development and progress is what our children desire, and the development battle is what we should be united for,” he said.

He condemned those working against unity, praying that “they see the light and seek peace”, and further asked all to remember sacrifices of chiefs, past and present who fought to cement the unity of Asogli State.

Togbe Afede also asked for unity for the entire Volta Region for its development.

“One voice can help address numerous developmental challenges in the Region. There are lots of things we need, which could be gotten through unity,” he said.

Togbe Anikpi III, Dufia of Ho Heve who chaired the durbar, said the unity should help bring on board the support of resourceful persons who had hitherto stayed away from the development of Ho.

Mr Victor Eleblu, Chairman of the Planning Committee, said central authority, which had been missing in Dome for decades would be restored, noting that the progress of the community had been stalled as a result of the division.

He said the youth disregarded authority and had gone berserk, turning the community into a haven for the lawless.

Mr Eleblu therefore called on Togbe Howusu to exert a “strong arm of authority” over the community.

“Law and order would be the only thing to be allowed to take seed among us. Dome is no more a ground for miscreants and evil doers,” he said.

The whole of Dome remain the warriors of Asogli now, after assuming the paramountcy status in the 19th century, when the then headman Agbenyoxe (leader of Ho Bankoe) ceded the position to Ho Dome for leading the Asogli State to victory against the invading Akwamus and the Ashantis.

The GNA was told that after possessing the paramountcy for years, the throne was realigned to Bankoe through political interference in 1958, amidst agitations leading to the misunderstandings.

The unification was marked with celebrations, which span several weeks, during which various rituals were performed.

There were also health walks, candle light vigils, and homecoming ceremonies for natives of Dome living in the diasporas.

The durbar was attended by chiefs from all Asogli divisions, as well as from neighboring states and communities, and also leaders of various religious organisation, who all delivered fraternal messages.

A Unity Junior High School would be constructed at Ho Dome to symbolise the unification, and received support from various individuals, including Togbe Afede who donated an amount of GH¢10,000.00 towards the project.

Chiefs of Ho Bankoe also presented a ram, drinks and other items to the people of Dome for the celebration.