Is The Year Of Return Fever Becoming A Nightmare For The NDC? 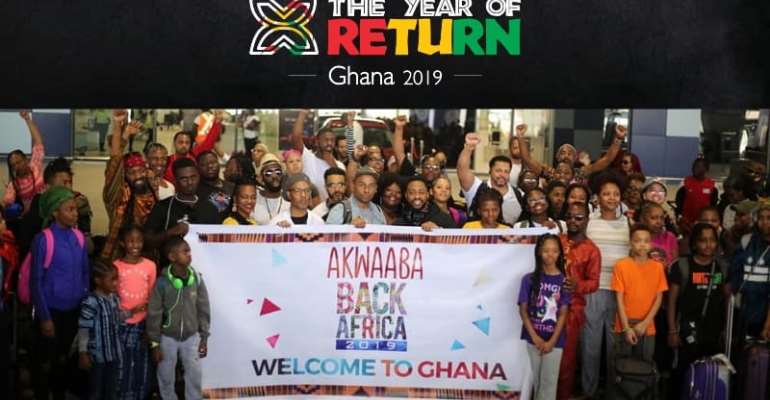 The Year of Return, albeit the initial opposition cynicism, has caught international fever now. It is an initiative by the Akufo-Addo led NPP administration, focused on encouraging African diasporans to come specifically to Ghana to settle and invest in the continent.

The campaign estimably have raked in $1.9 billion into Ghana’s economy and has also witnessed global celebs including Steve Harvey, Nicole Ari Parker, Diggy Simmons, and Micheal Jai White, Ludacris, Cardi B, AKON, Rick Ross and Bozoma Saint John who have been among a host of celebrities having some stint in Ghana.

The government that masterminded this concept must be made up of characters who possess the competent flair and exceptional intellectual mileage.

The NDC dreadfully troubled by the unexampled feat of this government in placing Ghana at heart of black world history, has reached out to the dusty shelves of their 20 million dollars Adabraka headquarters to produce contrived documents that the Rawlings’ NDC Government achieved similarly with PANAFEST. It is shameful that the operatives of NDC are seeking to dig out legacies of President Rawlings, a man they have constantly lambasted for his stands that John Mahama’s government was irreparably corrupt, to fix their battered image

Unbeknownst to them, the facts on the ground do not support that assertion. Contrary to their uninformed position, PANAFEST was not a government initiative but a private affair mooted, fronted and materialized by the Ghanaian playwright, Efua Theodora Sutherland. It had government participation in the series of events the initiative mounted but certainly, it was not government-led.

The successes PANAFEST chalked can therefore not be attributed to the Rawlings’ NDC. NDC folks should dump their fidelity to debating issues with no factual dexterity and get informed for a moment.

Clearly, in the ecosystem of tourism, arts, and culture the NDC governments cannot pull out any initiative that equalizes the Year of Return. The Year of Return is the single most successful global drive to be accomplished by an African President and proudly so, that is President Nana Akuffo Addo. Not even the South African 2010 World Cup was able to garner such global traffic and promotion.