Nana Akufo Addo, Work For The Benefit Of Ghanaians Not For NPP Party 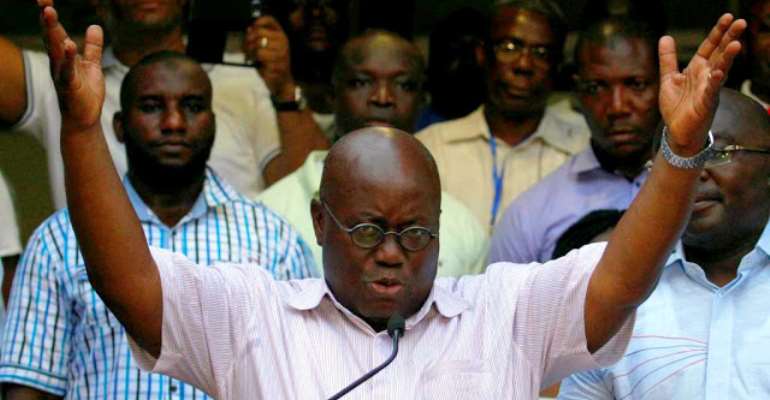 It might be too early to understand what Ghana will become, with respect to its future commitments, let’s assume by 2030. That is if only the government has such a plan.

Because, like many African countries, the Ghanaian government doesn't think of the future. This has caused the country to lose thousands, probably millions of cedis.

Just the end of this year, the Ghanaian government, through the Bank of Ghana, came out with new banknotes of 100 and 200 cedi denominations.

With such a depreciating economy, such large amounts will worsen the harsh economic situation but that issue was ignored. This is a piece of evidence that the government likes to do things that benefit the party but not for the suffering population.

At the same time, according to the government, Ghana is determined to join a new West African currency, called the Eco, which is expected to replace the CFA Franc as early as 2020.

If that’s the case, the question is: why did the government wasted the country’s hard-earned resources to print those currencies?

In this modern era, every penny counts, resources are never wasted without any significant results. Since the currencies were issued, can the government boast of an improved economy or the creation of jobs for the suffering unemployed Ghanaians?

In another development, the government wants new voters’ register for next year elections, for what? Nana Akufo Addo, why are you wasting Ghana’s resources when thousands of people are suffering and unemployed?

It’s very sad that Ghanaian leaders lack the knowledge to utilize the country's resources towards developments but know how to waste money.

As a president, you have the right to do many things but you must first think and ask: I am doing this to benefit Ghanaians or for my party to win the elections? If the latter is the reason, then you are a very selfish and greedy president.

You don’t have to do things in your favour or for the party, do them for Ghanaians. They are those that voted for you, you didn’t become a president through voodoo or magic. They voted for you, therefore, respect the people.

Like many Ghanaians, I have doubts about your leadership, when it comes to a sustainable economy, development, and employment in the country because you and your over-123 ministers have no idea of how to do it.

That’s not an exaggeration; they lack the knowledge, the reason Ghana is now in a terrible state.

The implementation of free education, whether responding well or not is a great effort. What dissatisfied Ghanaians must understand is it takes time for every new thing to materialize, therefore, time will tell.

Also, the recent efforts of the government encouraging the consumption of local food including rice, in the country, is another great step that you deserve commendation.

However, there are many things that, Nana Akufo Addo, the approach is wrong, therefore, undermined your government and ruining your reputation as well.

Many Ghanaians know that you have been in power for only three years, yet your leadership has been overshadowed by failures than success, which I blame you because you have followed your ego and selfishness to ruin Ghana.

John Mahama is not the current Ghanaian president, therefore, let your party stop blaming him for your incompetence.