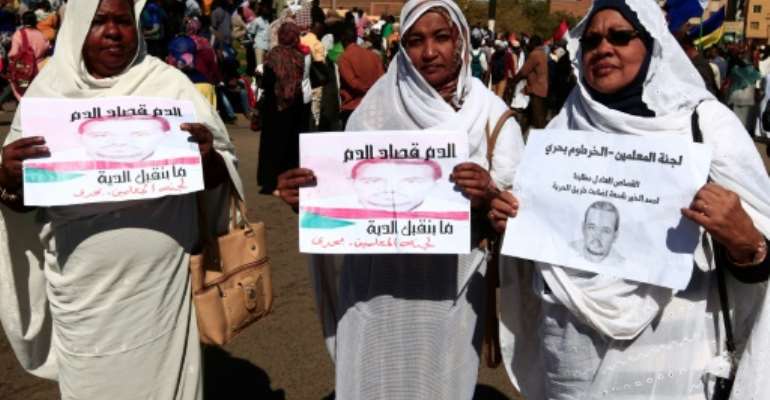 Members of Khartoum's Teachers' Association in front of a court during the trial of intelligence agents who tortured and killed a fellow teacher. By Ebrahim HAMID (AFP)

A Sudanese court on Monday sentenced 27 intelligence agents to death for torturing and killing a protester early this year, an AFP correspondent said.

It is the first time members of the security forces have been condemned to death in relation to the killing of protesters whose movement toppled veteran autocrat Omar al-Bashir.

The defendants were found guilty of torturing to death Ahmed al-Kheir Awadh at an intelligence services facility and sentenced to be hanged, judge Sadok Albdelrahman said.

The teacher was beaten and tortured to death after he was arrested in late January by intelligence operatives in Kassala state in eastern Sudan, the judge said.

Dozens of protesters from the capital's teachers' association gathered in front of the court in Khartoum's twin city of Omdurman, carrying pictures of Awadh.

Defence lawyers have two weeks to lodge an appeal against the death sentences.

Sudanese first took to the streets just over a year ago, to protest against high bread prices, but the demonstrations soon turned into demands for Bashir to step down.

The president was deposed in April by the military, but huge protests continued, culminating in a compromise that saw a joint military-civilian transitional council formed in August.

At least 177 people were killed in repression of the months-long protests, according to rights group Amnesty International, while a doctors' committee close to the protest movement put the toll at over 250.

Many of those killed were the victims of a June 3 massacre outside army headquarters in Khartoum, perpetrated by men in military fatigues.

On the first anniversary of the protests, thousands of Sudanese citizens earlier this month took to the streets of Khartoum and other cities, in order to pay their respects to the "martyrs of the revolution".

Bashir was on December 14 sentenced to two years in an elderly offenders' institution after being convicted in a corruption case.

The former president faces numerous other domestic probes, and he has long been wanted by the International Criminal Court for alleged crimes, including genocide, related to the conflict in Darfur.

The transitional administration inherited an enfeebled economy, which was battered by years of US sanctions under Bashir, patronage and the secession of oil-rich South Sudan in 2011.

The first post-Bashir budget was unveiled by the government late Sunday. It envisages an increase in the deficit to 3.5 percent of gross domestic product (GDP) in 2020, up from 3.3 percent in 2019.