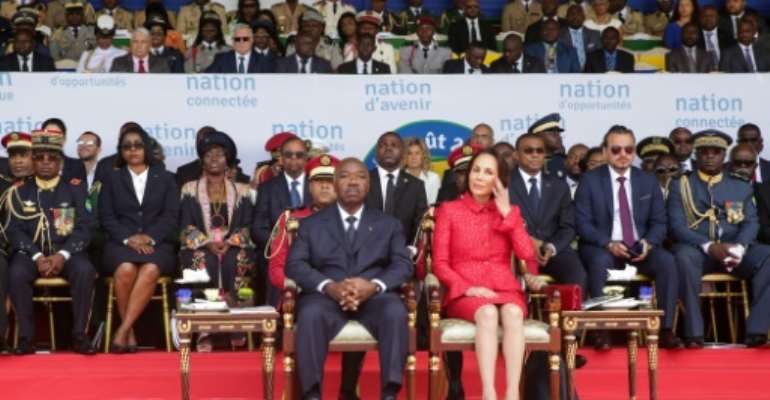 File picture from Gabon's independence day celebrations on August 17, with President Ali Bongo and his wife Sylvia sitting on the tribune and Bongo's chief of staff, Brice Laccruche Alihanga, seated behind them, second from right. By Steve JORDAN (AFP/File)

Two senior officials, including a former minister, have been detained in an ongoing anti-graft operation in Gabon, a source close to the investigation said on Monday.

Justin Ndoundangoye, a former transport minister and lawmaker, "was arrested on Thursday after trying to flee to Congo and is currently in custody," the source said.

Alexis Ndouna, a former senior figure in the ruling party, was extradited on Saturday to Gabon from neighbouring Congo, where he had been detained.

Ndouna is "under investigation for embezzlement of public funds and also for a case of (alleged) rape of a minor," the source said.

Ndouna was picked up in the capital of the Republic of Congo, also called Congo-Brazzaville, under an international arrest warrant, issued in October, for alleged sex with a 14-year-old schoolgirl.

Around a dozen people are now in custody, including three former ministers and a former presidential spokesman.

Laccruche was arrested on December 3 along with two other figures deemed to be his friends -- Tony Ondo Mba, the former energy minister, and Noel Mboumba, former oil minister.

Laccruche, appointed chief of staff in 2017, gained a reputation as a power broker in the central African state after Bongo suffered a stroke in October last year.

Bongo returned to the country after several months abroad for treatment.

Laccruche was dismissed as chief of staff in early November after Bongo stepped up his public appearances in a sign of improving health.

The oil-rich state has been governed by Bongo since 2009. He was elected president after the death of his father, Omar Bongo Ondimba, who came to power in 1967.

The country has long had a reputation for corruption and inequality.