An Open Letter To Mr. John Dramani Mahama: You Want To Bridge The Wide Salary Gaps Between Article 71 Officers And Other Public Sector Workers? 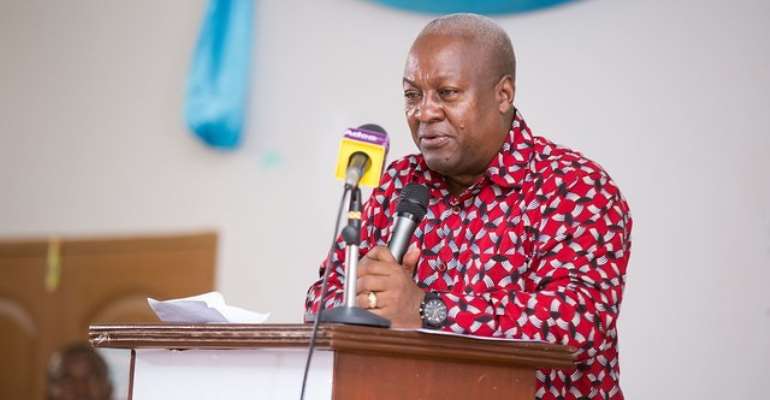 Dear Sir, in my capacity as an ordinary Ghanaian, I write this open letter to you regarding the question in the caption of the letter. I am equally writing to you in your capacity as the presidential candidate for the National Democratic Congress (NDC) in the upcoming 2020 general elections. I will therefore not address you as former President. Bro Dramani, I hope you are in good health. Merry Christmas to you and a very happy campaign year to you in advance. So far, you are the only flagbearer in the country because the other political parties are yet to go to congress and elect theirs. You are lucky bro, “chop the post” as a Ghanaian would say.

Enough of the preludes Bro JDM. The other day after you had a consultative meeting with the leadership of the Trades Union Congress (TUC), it was reported in the media that you assured that when you become the President again, you will bridge the prevailing wide salary gaps between article 71 officers and the other public sector workers of Ghana. To me, this sounds good. Is it true that you said so? If it is true, are you sure it is not what you taught me yourself? You kept saying political gimmick on the campaign trail in 2016. Are you sure that you are not in the arena of political gimmicks by saying what you said?

Perhaps some do not readily know who are the article 71 officers so let me remind them before we proceed, sir. Article 71 of the 1992 (Fourth Republican) Constitution of Ghana touches on the salaries and allowances payable and the facilities, and privileges available to some constitutionally selected public officers.

As it stands now, the article 71 officers are treated far better in terms of salaries and privileges than the other public sector workers especially those in the Public Services (article 190 workers) that President Kufuor said Government pretends to pay and they also pretend to work. But do they really pretend to work? Methinks no, they actually work and they do so productively but Government denies them what they truly deserve.

Back to the discussion Mr. John Dramani Mahama. In a way, I believe you will surely bridge the wide salary gaps between the article 71 officers and other public sector workers when you become President again. My belief or conviction emanates from my personal encounter with you in 2014 when you visited a public organization I was leading at the time. I hosted you and conducted you round the organization. We had one-on-one talks and I put some challenges before you to intervene so we resolve them. Within a week, you actually intervened and I was impressed that you walked the talks. That was the first time I hosted a President so it was a nice encounter with you. It was on 30th August 2014. You even wrote in the visitors’ book. You said, “Warmest compliments to the hard working staff of …..I am impressed at the sense of dedication of your staff, despite the challenges that face your young organization. Best regards.” After these encouraging words, you signed your long signature and wrote President beneath it. It was impressive how you responded swiftly to help us save the dying situation at hand at the time. I hope you will attach the same truthful seriousness to this assurance of improving salaries you have just given the public sector workers through the TUC.

Bro John Mahama, so long as the economy is managed continuously like George Orwell’s Animal Farm where two legs are bad, but four legs are good, corruption, and perceptions of corruption will continue to exist. There are equally non-article 71 public sector workers that are highly qualified and more productive than the article 71 officers so the former deserve better salaries, allowances and privileges than they enjoy currently. As such, your assurance is in the right direction. We only hope avidly that this will not become a deferred hope that will once again break the hearts of most public sector workers.

In another breath Bro JM, I take your assurance with a pinch of salt and I will give you my reasons. You said you would call for a review or an amendment of article 71 of the Constitution to make it possible for you to bridge the astronomical salary gaps between the article 71 officers and the other public sector workers. You also said you would then establish an Independent Emoluments Commission (IEC). Is there anything truly independent in Ghana? You the political class or elites control every aspect of society with partisan politics. Even the church, which is the body of Jesus Christ is not spared. There are partisan politicians in clerical wears speaking campaign messages from the pulpit and giving so-called prophesies regarding which party will win an election and which leader will die. They call themselves pastors, reverends, bishops, archbishops, angels, apostles and many more. They disseminate their scripturally coated political messages as prophesies they receive from the Lord God Almighty. The Bible cautions to identify them by their fruits.

Again, with your proposed establishment of IEC, what happens to the Fair Wages and Salaries Commission (FWSC) established in 2007 with the introduction of the Single Spine Pay Policy (SSPP)?. Under your watch as JEA Mills’ Vice President, the erstwhile CEO of the FWSC became an untouchable tin god who made the fair wages unfair through his emotive whims and caprices. He placed some of the public sectors on salary scales as it pleased him. This created a lot of mess in the health sector for example, whereby even trainees in some of the clinical grades take salaries and market premiums far more than their non-clinical counterparts that have been on the job for more than a decade. Bro John Mahama, a decade is 10 years ooo. Some of these non-clinical staff are even managers of the health facilities that train the clinical interns. What a bogus salary regime? As a Vice President and later President, you were mute over this from 2008 to 2016 and now that you are promising from opposition, a greener pasture to the non-article 71 workers? This why I doubt your assurance sir.

Bro JM, because you people are defined as article 71 workers and you are treated better, you careless about the rest. By this, I mean you the top-notch politicians regardless of the political parties you belong to and not only you John Mahama.

Is the idea of bridging the salary gaps now coming when you are in opposition or it was there but you ignored it and you just want to use it to come back to power? Permit me to ask you all of these questions because the pen I hold speaks the voice of the ordinary citizens or the men of straw. Now, must you necessarily bridge any salary gaps to make remunerations better for the other public sector workers? Must you establish an IEC to do so? I think you can continue enjoying your article 71 remunerations but ensure that all others in the five major sectors of the economy (Economic Services, Social Services, Infrastructural Services, Public Safety, and Administration) are equally paid what they deserve and not the existing meagre salaries.

Health workers in this country retire home on meagre pensions and even though they once cared for the nation and saved lives, they can only have access to care if only they can pay or use the NHIS card that does not cover so many chronic and geriatric disease conditions. Just like the other presidential candidates in the upcoming 2020 elections, I wish you well but ensure that should you become our President again, your promises and assurances today do not become mere political gimmicks as you would say.

Bro John Dramani Mahama, JDM, JM, Asomdwehene II, should you win, walk the talks as you did in my organization in 2014. May God bless your enterprise.