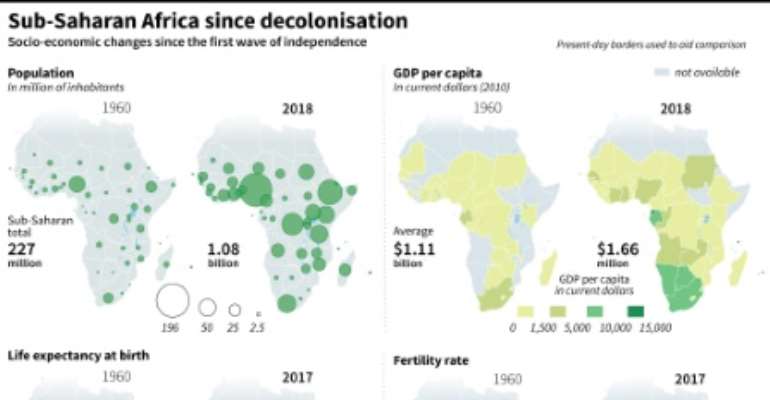 As 1960 dawned, sub-Saharan Africa braced for historic change: that year, 17 of its countries were destined to gain independence from European colonial powers.

But six decades on, the continent is mired in many problems. It is struggling to build an economic model that encourages enduring growth, addresses poverty and provides a future for its youth.

Here are some of the key issues:

Africa's population grew from 227 million in 1960 to more than one billion in 2018. More than 60 percent are aged under 25, according to the Brookings Institution, a US think tank. 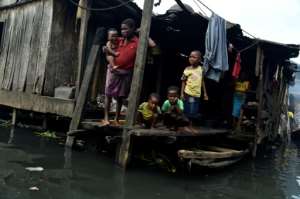 A lack of opportunity for Africa's swelling ranks of youths could spell trouble. By PIUS UTOMI EKPEI (AFP/File)

"The most striking change for me is the increasing reality of disaffected youth... a younger population that is ready to explode at any moment," Cameroonian sociologist Francis Nyamnjoh told AFP.

Joblessness is a major peril. Unemployed youths are an easy prey for armed groups, particularly jihadist movements in the Sahel, or may be tempted to risk clandestine emigration, often at the cost of their lives.

The continent's population is expected to double by 2050, led by Nigeria, Ethiopia and Democratic Republic of Congo (DRC). 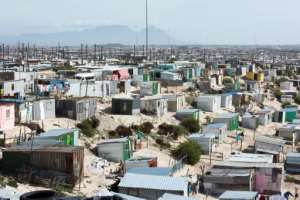 Even if poverty rates have fallen across much of Africa, the continent is still beset by enormous inequality. By RODGER BOSCH (AFP/File)

But this average masks enormous differences from one country to another, exemplified by Gabon (3.4 percent of the population in 2017) and Madagascar (77.6 percent in 2012).

Christophe Cottet, an economist at the French Development Agency (AFD), pointed out that inequality in Africa is "very poorly measured."

"There are notably no figures on inequalities of inherited wealth, a key issue in Africa."

Recent decades have seen the expansion of megacities like Lagos and Kinshasa, typically ringed by shantytowns where people live in extreme poverty, although many medium-sized cities have also grown. 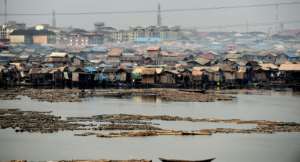 Shanty communities are not unusual in African cities as housing fails to keep pace with the population. By PIUS UTOMI EKPEI (AFP/File)

More than 40 percent of Africans now live in urban areas, compared with 14.6 percent in 1960, according to the World Bank.

In 1960, Cairo and Johannesburg were the only African cities with more than a million residents. Consultants McKinsey and Company estimate that by 2030, about 100 cities will have a million inhabitants, twice as many as in Latin America.

But this urban growth is not necessarily the outcome of a rural exodus, said Cottet.

"The population is rising across Africa as a whole, rather faster in towns than in rural areas," said Cottet.

"There is also the problem of unemployment in towns -- (rural) people have little interest in migrating there."

Growth in Africa slammed to a halt in the early 1980s, braked by a debt crisis and structural adjustment policies. It took two decades to recover. 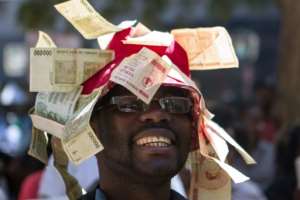 Attempts by African countries to get around fiscal constraints didn't always end well, such as this Zimbabwean man who decorated his hat with worthless currency. By ZINYANGE AUNTONY (AFP/File)

"If you do an assessment over 60 years, something serious happened in Africa, with the loss of 20 years. But there is no denying that what is happening now is more positive," Cottet said.

The IMF's and World Bank's structural adjustment programmes "broke the motors of growth," said Nubukpo, whose book, "L'Urgence Africaine," (The African Emergency) makes the case for a revamped growth model.

The belt-tightening programmes "emphasised the short term, to the detriment of investments in education, health and training."

Africa has a low rate of industrialisation, is heavily dependent on agriculture and its service sector has only recently started to emerge.

"We have not escaped the colonial model. Basically, Africa remains a producer and exporter of raw materials," said Nubukpo. 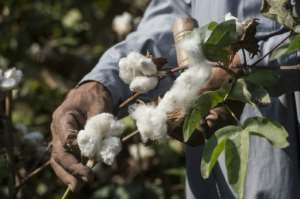 Nearly all of Africa's cotton is exported without having been processed. By Khaled DESOUKI (AFP/File)

He gave the example of cotton: 97 percent of Africa's cotton fibre is exported without processing -- the phase which adds value to raw materials and provides jobs.

For Jean-Joseph Boillot, a researcher attached to the French Institute for International and Strategic Affairs, "Africa is still seeking an economic model of development."

"There is very little development of local industries," he said.

"This can only be achieved through a very strong approach, of continental industrial protection -- but this is undermined by the great powers in order to pursue free trade.

"The Chinese, the Indians and Westerners want to be able to go on distributing their products."

Lack of democracy, transparency and efficient judicial systems are major brakes on African growth, and wealth is concentrated in the hands of a few, said the experts.

Of the 40 states deemed last year to be the most world's most corrupt countries, 20 are in sub-Saharan Africa, according to Transparency International. 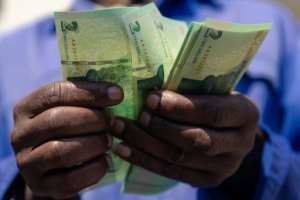 Sub-Saharan Africa has half of the countries deemed to the world's most corrupt by Transparency International. By Jekesai NJIKIZANA (AFP/File)

"Africa is not developing because it is caught in the trap of private wealth and the top wealth holders are African leaders," said Nubukpo.

"We must promote democracy, free and transparent elections to have legitimate leaders who have the public interest at heart, which we absolutely do not have."

Nyamnjoh also pointed to marginalised groups -- "There should be more room for inclusivity of voices, including voices of the young, voices of women."