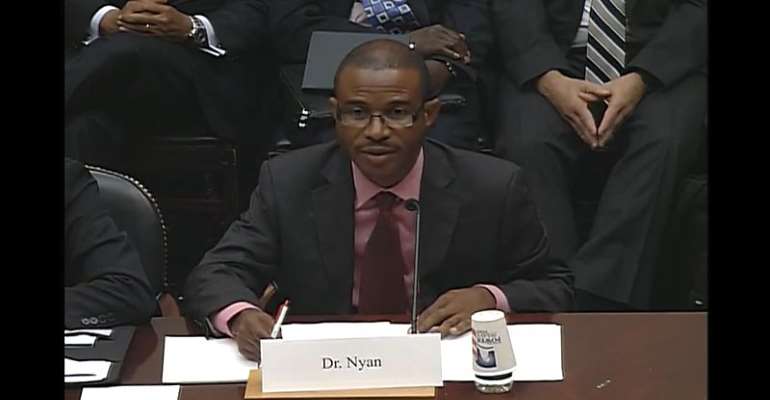 Dr. Dougbeh Chris Nyan, M.D. Testifying before the US Congress in 2014

Liberia's eminent scientist and medical doctor, Dougbeh Christopher Nyan has called on "President George Weah to embrace the December 30th Protest and listen to the grievances of the Liberian people, instead of being combative and defensive." The Liberia scientist and political activist made the statement during a recent conference call with a cross-section of journalists.

Dr. Nyan, said that "there is no need for the Weah government to be afraid of the truth, but to accept the criticisms of the people with open heart. Don't always look out for praises from your supporters as these unwarranted praises are the source of misleading information on the dire economic and political realities in the country," he added.

“It is the constitutional rights of the citizens to peacefully assemble and protest and government should provide security, instead of engaging in scared-tactics and fear-mongering with heavily armed police marching through the streets of Monrovia. Intimidation of protestors did not work in the past and will not work now,” Dr. Nyan added.

A group of citizens under the banner “COP” has planned to stage a civil protest in Liberia. Representatives of the Economic Community of West African States (ECOWAS) and the United Nations have both recognized the rights of citizens to protest, while stressing the maintenance of peace and stability in the Liberia. During the Liberian civil war that lasted from 1989 to 2003 and taking approximately 250,000 lives, ECOWAS peace keeping forces were largely responsible for restoring peace to Liberia.

In the past several months since his inauguration in January 2018, “the Weah government has been involved in massive corruption, providing inaccurate information in the missing $16 Billion and $25 Milion, mismanaging of the economy, clamping down on the press and critical voices, dividing the population on tribal-ethnic lines, and government officials living lavish lifestyles, while the ordinary citizen are suffering to survive,” observed Dr. Nyan.

Responding to questions on the recent leaked tapes of the Chairman of the Congress for Democratic Change (CDC) Mr. Mulbah Morlu, the prominent scientist said that, “the tapes were damaging to the image of the president and contain impeachable statements.”

He further stated that, “if it is true according to Mr. Morlu that the president diverts public monies to his personal use and that the president is trading jobs for sex, then the Legislature should consider looking into these allegations for possible constitutional actions against the president.”

Dr. Nyan further stated that, “unfortunately, we have an invertebrate Legislature where some lawmakers only seek after bribes from the Executive than representing the interest of the people and the nation.”

He said that like all previous protests, the December 30 protest is will simply highlight the plight of the people and may fall short of bringing Weah down,” stating further that “I admonish the protest organizers to remain civil and peaceful so as to advert unprovoked violence.”

Dougbeh Nyan is the inventor of the multiplex infectious disease diagnostic test, called the NYAN-TEST. He is an executive of the National Democratic Coalition of Liberia (NDC), a coalition of Liberia’s social democratic parties.

Dr. Nyan, the 2016 National Independence Day Orator, emphasized that, “Liberians want peace, tranquility and social justice, but if the government is otherwise interested in stealing the nation’s wealth and abusing power, then advocacy community will not relent in pressing the International community for sanctions against the Liberian government.”