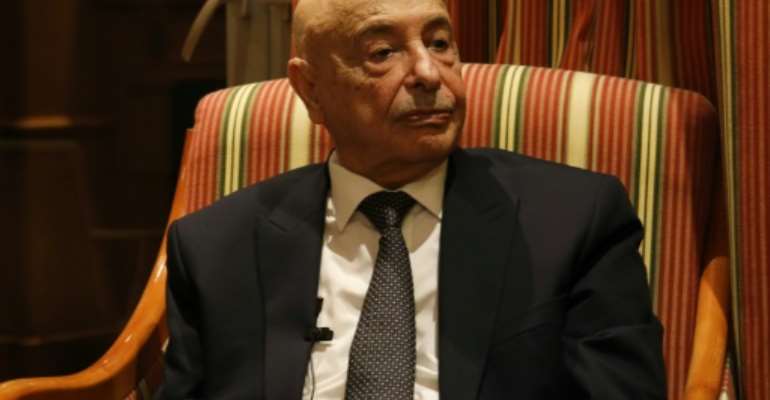 Libya's parliament speaker Aguila Saleh visited Cyprus at a time of rising tensions in the Mediterranean. By Christina ASSI (AFP)

The speaker of Libya's parliament on Saturday urged the international community to reject the legitimacy of the war-torn country's UN-recognised government which is pursuing closer military ties with Turkey.

Libya has been beset by chaos since a NATO-backed uprising toppled and killed dictator Moamer Kadhafi in 2011, with rival administrations in the east and the west vying for power.

In a reflection of the deep political divisions, the elected parliament in the east is allied with military strongman Khalifa Haftar, who is at war with the Tripoli-based Government of National Accord (GNA) recognised by the United Nations.

"In the coming days, the Libyan parliament will take action to ensure the withdrawal of international recognition of this government," parliament speaker Aguila Saleh told AFP in an interview during a visit to Cyprus.

Saleh said he had asked Cypriot Foreign Minister Nicos Christodoulides to "convey a message to the European Union so that it withdraws its recognition of this government (the GNA).

"It is time to form a new government supported by the Libyan people and parliament."

Libya's parliament has itself been weakened by the departure of several dozen anti-Haftar lawmakers for Tripoli.

Saleh's visit follows a rise in tensions between Turkey on the one hand and EU members Greece and Cyprus on the other in a conflict over offshore hydrocarbon resources that has drawn in Libya.

Turkey in November signed a deal with the GNA in Tripoli in which the two parties lay claim to much of the Mediterranean, conflicting with rival claims by Greece and Cyprus.

At the same time, Turkey is stepping up military aid to Tripoli, which is battling Haftar's forces for control of the capital.

In a joint statement, they called the Turkey-GNA agreement a violation of international law, labelled Turkey's plan to send troops to Libya unacceptable and charged Ankara was escalating regional tensions, reported the Cyprus News Agency.

One provides for a direct military intervention by Turkish forces in support of the GNA, a move Ankara says may begin as early as next month.

The other sets a maritime boundary between Libya and Turkey, which has angered Greece and Cyprus as they step up plans to exploit offshore gas reserves in the eastern Mediterranean.

Cyprus has been divided along ethnic lines since 1974 when Turkey invaded its northern third in response to an Athens-engineered Greek Cypriot coup seeking to unite the whole island with Greece.

The Cyprus government has no diplomatic relations with Turkey.