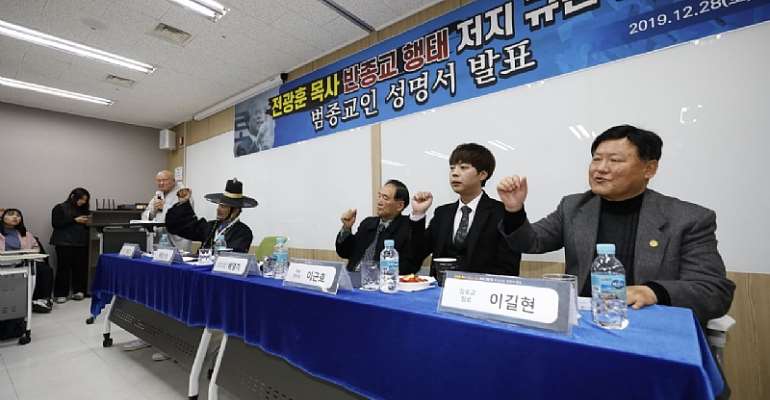 On December 28, about 50 prominent South Korean religious leaders issued a joint statement declaring the Presbyterian pastor Rev. Jun Kwang-hoon as a “public enemy” with sacrilege and criminal activities, as concern and controversy are coming from his hate speeches and anti-government activities.

The event was hosted by the Christian Federation of Anti-Corruption and Sponsored by Pan-Religion Association. In the statement the religious leaders “denounce Rev. Jun for the sins committing social conflict and division” due to his remarks including “God, if you mess around, I’ll kill you.”, “Islam and homosexuality are diseases,” and “Women say Satan’s words.”

“Tell a young female believer take off her panties and say, ‘I want to sleep with you.’ If she accepts, she is a believer. If she refuses, she is a shit,” said Rev. Jun in a training program for pastors to explain a way to distinguish a “true” follower of church.

Criticism against Rev. Jun from the religious world was triggered when he said, “Those who believe Buddhism should go to prison or uninhabited island.” In his inaugural speech as President of the CCK in February, he stated that his major task is to “block homosexuality, Islam and Anti-discrimination law.”

Back in October 2019, calling the South Korean President Moon Jae-In “a son of bixxh”, Rev. Jun has led an anti-government demonstration and insisted that President Moon is a spy and there are 500,000 followers of North Korea to “drive the country to ruin” by taking it away from the United States. After the event, he added, “Hallelujah. The most pleasant time has come. Time to collect offerings.”

Massimo Introvigne, an Italian sociologist and the director of Center for Studies on New Religions (CESNUR) as the largest international organization studying new religious movements, noted that “the activities of the CCK and Rev. Jun Kwang-hoon are causing international concern. In addition to their radical political activities, the CCK and Rev. Jun are spreading religious intolerance in Korea and abroad through hate speech and discrimination against groups they label as ‘heretic.’”

“The growing concern of the CCK and Rev. Jun is coming from the question the Constitution of South Korea that mandates the separation of religion and state. Over the political activism the Western media pointed out, Rev. Jun’s anti-social, anti-religious, and anti-national remarks and behaviors are something to be called a “public enemy,” said Ven. Hyewon, South Korean Representative of World Buddhist Summit. 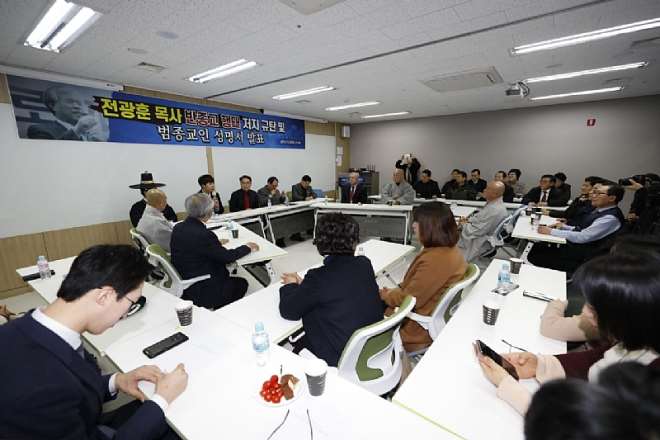