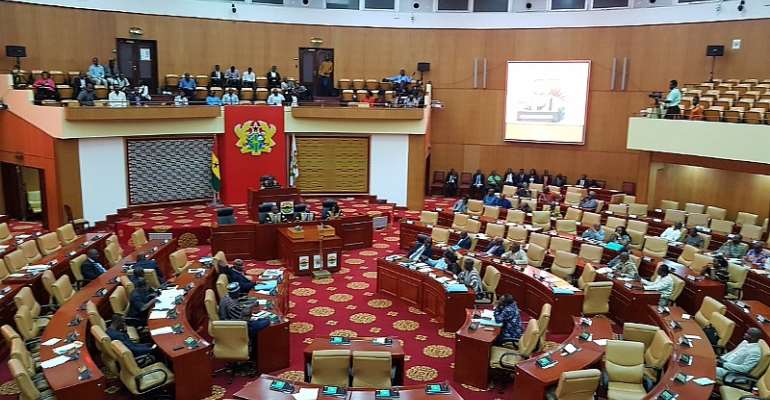 Parliament, before going on recess on Monday for the Christmas holidays, gave the Government the approval to spend GH¢98.036 billion for the 2020 financial year.

Out of the amount, the House approved and authorized GH¢53.294 billion to be withdrawn to finance government operations during the 2020 financial year.

This was announced in the Appropriation Bill, which was taken through the Second Reading, requesting the House to approve and authorize the withdrawals of monies from the Consolidated Fund and other funds for the running of the State during the 2020 Financial Year.

The Bill repeals the Appropriation Act 2018 and authorized the withdrawal of sums of monies from the Consolidated Fund and other funds for the implementation of the Budget.

It was read for the first time in the House, on Saturday, December 21, 2019, by Finance Minister Ken Ofori-Atta, and later referred to the Finance Committee for consideration and report.

Dr. Mark Assibey-Yeboah, the Chairman of Parliament's Finance Committee, stated in the Committee's report that the specific purposes for which the sums shall be appropriated have been specified in the Schedules to the Bill and are all geared towards carrying out efficiently the services of the Government for the 2020 Financial Year.

The House had earlier approved various sums as budget estimates for Ministries, Departments, and Agencies (MDAs) and it, therefore, became imperative that the Minister of Finance be given authority to withdraw such approved monies for the purposes thereof.

The Finance Committee stated that MDAs shall be permitted to retain and use GH¢4.9 billion of their Internally Generated Funds (IGFs) next year.

Finance Minister Ken Ofori-Atta, acting on the authority of the President, on Wednesday, November 13, presented the 2020 Budget Statement and Economic Policy of the Government to Parliament and requested the House to approve and authorize the withdrawal of monies from the Consolidated Fund and other funds for the running of the State.