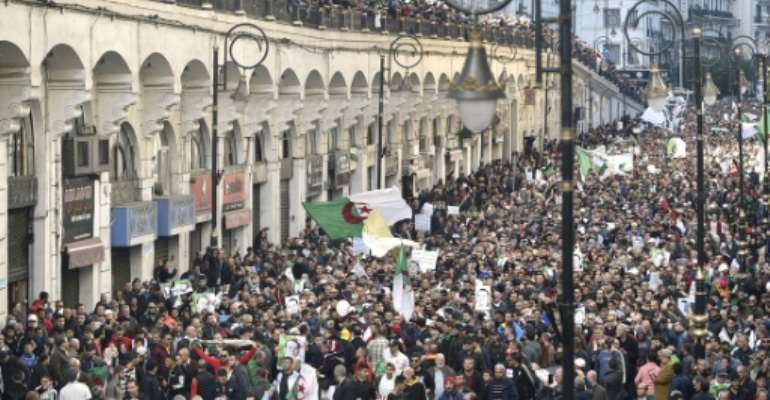 Algerian protesters take part in an anti-government demonstration in the capital Algiers on December 27, 2019 for the 45th Friday in a row. By RYAD KRAMDI (AFP)

Tens of thousands of Algerians demonstrated Friday for the second consecutive week since the contentious election of a new president, insisting on a total revamp of the political establishment.

Since February 22, the streets of the capital Algiers have been filled with protesters every Friday, first calling for the ouster of president Abdelaziz Bouteflika then pushing for a complete overhaul of the political system in place since Algeria's 1962 independence from France.

Turnout at the marches has seen peaks and troughs over the months, but they swelled in recent weeks ahead of a presidential election to replace Bouteflika, which protesters saw as a ploy to ensure establishment insiders stayed in power.

On Friday, the demonstration seemed one of the smallest since the start of the unprecedented, peaceful uprising, with some protesters saying school and university holidays had kept people away.

Still, those in the streets said they were determined to press ahead with the protest movement.

"We are here, we continue the fight," said Hocine, a 50-year-old civil servant in the procession.

Pensioner Fatma Zohra added: "The government cannot win against the people. It is the people who decide. The movement is still strong."

The crowd was outnumbered by the throngs of people who had turned out for the funeral on Wednesday of powerful army chief Ahmed Gaid Salah, who had become the de facto strongman in the country after Bouteflika's resignation in April.

Gaid Salah, reviled by protesters, was instrumental in pushing through the December 12 vote that elected Abdelmadjid Tebboune, a former prime minister who had served under Bouteflika and is seen as an establishment insider.

Tebboune won with 58.1 percent of the vote on a turnout of less than 40 percent, according to official results, and was sworn in on December 19, days before Gaid Salah died of a heart attack at age 79. 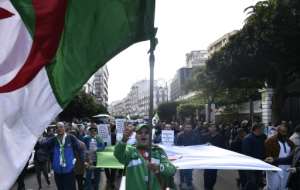 Algerians seem divided as their protest movement is almost one year old on what steps to take after the December presidential election of former prime minister Amdelmajid Tebboune to replace veteran leader Abdelaziz Bouteflika. By RYAD KRAMDI (AFP)

His election was boycotted by a large part of the electorate, including protesters and activists who were demanding deep-rooted political reforms before any poll.

Gaid Salah, who served as army chief for 15 years, was considered by the protest movement as the uncompromising guardian of the system it challenged and was regularly lambasted during demonstrations.

His death added to political turmoil in the North African country, after Tebboune's invitation to dialogue was rejected by protesters.

Protests also took place in second and third cities Oran and Constantine and in other towns, but not in Annaba, hometown of Gaid Salah, according to a local journalist who said police prevented demonstrors from marching.

But before the protest got underway in Algiers, demonstrators seemed divided over the movement's post-election steps, with some saying they were determined to continue, while others said they were ready for talks with the government.

"I will march until we get a true democracy. I don't recognise this president," 55-year-old Akli said in an Algiers market referring to Tebboune.

Kamel, a lawyer, said he had protested until December 13 but was now torn.

"The government must free prisoners of conscience (arrested during the protests)... to show their good intentions" and the protest movement "should organise itself and engage in dialogue" he said.

"Marching, it's good. It's a wonderful endeavour, but until when?"