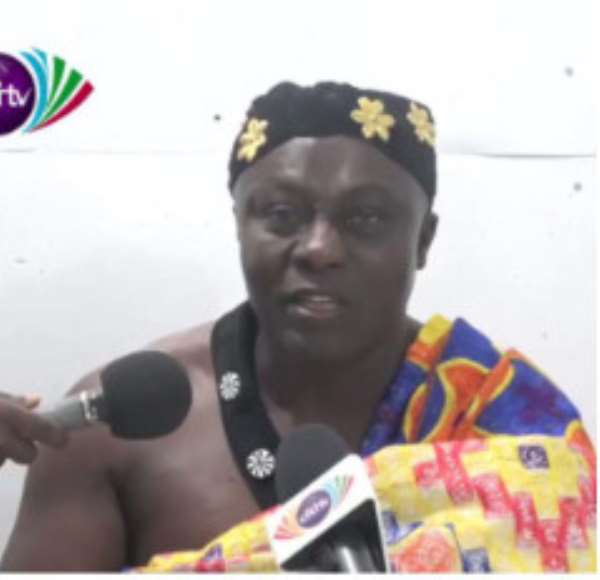 The Chief of Aketekyieso, Nana Gyamfi Brobbey II has been severely brutalised by thugs allegedly ordered by two District Chief Executives (DCEs) for opposing illegal mining in his community.

Aketekyieso is a suburb in Obuasi and the land is located in a boundary between Amansie Jacobu and Fomena Adansi in the Ashanti Region.

On Tuesday December 24, 2019, a notorious galamsey operator, popularly known as Akwasi Macho who allegedly works for the DCE of Amansie Central District, Hon Kwame Asamoah-Boateng and the DCE of Adansi Fomena District, Hon Eric Kusi, physically assaulted the chief for visiting the galamsey site which the community owns but currently operated by the cronies of the two DCEs.

Nana Gyamfi who collapsed as a result of the beatings was rushed to Obuasi Ridge Hospital for recovery. According to the medical doctor, the chief suffered weaknesses, body pains, occipital and confusional injuries.

The chief was discharged from the hospital the next day but he has been submitting himself to the doctor for observation. The case was however reported to the Obuasi Divisional CID of the Ghana Police Service.

The Aketekyieso community discovered a vein-type gold deposit in 2018 by some farmers and the chief subsequently reported the unexpected findings to the Amansie Central DCE for the necessary small-scale mining documentations to enable the youth in the community to operate legitimate mining as required by the Mineral and Mining Act 2006, Act 703.

The Chief followed up to the Inter-Ministerial Committee of Illegal Mining in Accra to ensure that the concession was demarcated for mining operations. He took this initiative to fulfill his employment creation vision for the people.

The chief spent around GHS 30,000 and followed the due processes to acquire the small-scale mining license for his concession. The community began peaceful small-scale mining operations in April, 2019 to lessen the unemployment burden faced by the people. As part of the agreement, a percentage of the mining proceeds was paid to the two DCEs every month. Nana began developmental projects in the community, including road construction and water project to benefit the people in the area.

In October 2019, the two DCEs took GHS 40,000 from the notorious galamsey operator and partnered with him to operate galamsey on the same concession which belongs to the community. They forcibly banned the chief and the entire local community from even visiting the mining concession. This issue has created misunderstandings since October, because the youth in the community have been rendered unemployed whereas Akwasi Macho’s gang members have been operating.

The “Odikro” has been complaining about this painful experience with these thugs but nobody seemed to listen to him. On December 24, the chief and his nephews embarked on a field visit to pour libation as yearly customs demand and he visited the galamsey site as part of the tour, where he almost met his sudden death. According to the chief, Akwasi Macho hit his back neck with a hammer and attempted to push him into an approximately 300 meters pit nearby in the presence of operations vanguard soldiers who were guarding the site. Intervention by some of the miners saved the chief and they rushed him to the hospital.

Speaking to this reporter in Denver, Colorado, USA as part of the investigations to ascertain the truth in the incident and postliminary taken up the matter, the chief pleaded to His Excellency, Nana Akufo Addo to step in and address the problematic situation in order to restore peace in the community. The Ghana Police Service has begun investigations into the matter and Solomon who hails from Obuasi has vowed to follow up on this matter because he feels his people have been maltreated by the two DCEs and the Inter-Ministerial Committee of Illegal Mining.