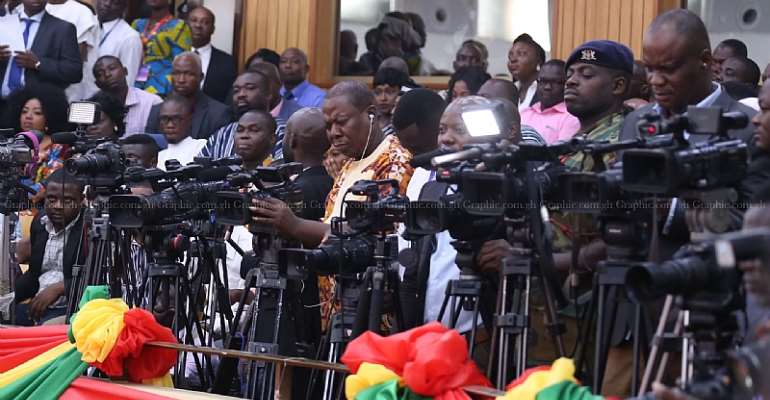 The media, comprising of Radio, Television, Newspaper and the Internet have an activated arsenal helpful for the dissemination of sensitive and impactful information to the masses. The numerous responsibilities entrusted to the media, its scope of servitude and span of operation, undoubtedly, catapult human development across all facets of life. But the unlimited power of the media, all things been equal, have the captivating prowess to mesmerize their diversified audience to exist either for or against a concept, policy, program, project or any initiative with a motivated spirit sparring from their outmost belief and trust in the media. At the spark of any positivity, the media, develops strong following of development oriented citizens yearning for patriotism, socio-economic growth, social accountability, monitoring and evaluation, productive services, among others.

Generally, the dissemination of information, a function of the media is a credible tool and means of amassing citizenship participation and their effective contribution of quota towards nation building. The continuous publicity by the media functions as a luring activity, an appetite for the patronization of any activity of benefit to once society.

The attainment of such feat would not ever be possible, importantly, on the score of the media failing to perform its core mandate, but rather substituting that with selfishly coerced practices on the principle of tilted concepts developed out of unprofessionalism. The primary goal of the media; to educate, inform and entertain its audience. However, the media project critical roles beyond the aforementioned in its quest of ensuring the promotion of public interest aspects. This has become necessary because citizens are stakeholders when it comes to media operations.

Additionally, the media can function at other useful ventures all in the interest of citizens and nation building; advocacy and adversarial roles, and informative and watchdogging roles have all paved way for effective collaboration between citizens and institutions of governance to drum home the course of human development across board. These roles have diverse effects and impacts on the lives of the people as highlighted:

Education: The media owe it as a primary duty or responsibility to educate the masses on new and existing government policies, events and other activities happening in our dear country. What it means is that the media should not only disseminate information to the masses. That is not enough. It is also expected of the media to help with explanations and interpretations of government policies, civic responsibilities, rights and privileges of citizens and the need for patriotism.

Inform: The media play an informative role in our society to the admiration of all. The media is entrusted with the role of providing required information on all activities of happenings, from local to national governance. It is the duty of the media to keep citizens informed on what or how events happen, its effects, causative factors and essence. This role includes informing the citizenry on developments activities, issues bothering on economics, health, education, politics, among other things. Importantly, if the media excels in this function, it will help with informed decision making.

Entertainment: The media perform this function to entertain their listenership or viewership. Extensively, this role prevents boredom via music, comedy, drama, movies, videos and concerts. The media can attach education to this particular role to develop inclusiveness on the part of citizens for their support for nation building.

Advocacy: It is important to note that the media have a huge platform to their advantage to project useful ideas and as well propagate positivity in its audience. However, the media ought to understand that such a role must only be centred on the interest of the general public or the voiceless in whose interest they are serving. In such a manner, motivation for the all hands on deck approach to issues becomes activated towards the betterment of all than any self-interest.

Significantly, the media also plays the watchdog role. This role by the media to check our political heads to offer their best and work assiduously in bringing developments to society. As it is, the media is empowered to question office holders on their roles, services, performances and actions. The mandate of the media is to evaluate, monitor and assess every activity of government and to ensure they make positive impact on the lives of the people they serve. The watch dog role also ensure that government responsible, transparent, accountable, just, and acting in the public interest. It is by this means that nation building is done to suppress corruption, illegalities or personal benefits.

In the light of such an atmosphere, the citizenry would have properly been positioned effectively ready for the participation or patronage of any project or program, particularly, the Sustainable Development Goals (SDGs) courtesy the media's efficiency.

In this new age, the media in the eyes of the public is expected to echo cases of significance to mankind and the planet and also develop continuity for such agenda, policies or programs. The case for the SDGs in its entirety befits the concept necessary for a global media advocacy and highlighting. Thus, the media helping achieve the SDGs is paramount to the betterment of human existence and the world.

The Sustainable Development Goals (SDGs) is a list of priorities set to be achieved by the year 2030. The Sustainable Development Goals are a collection of 17 global goals set by the United Nations General Assembly in 2015 for the year 2030. The SDGs are part of Resolution 70/1 of the United Nations General Assembly, the 2030 Agenda.

These 17 Goals build on the successes of the Millennium Development Goals, while including new areas such as climate change, economic inequality, innovation, sustainable consumption, peace and justice, among other priorities. The goals are interconnected often the key to success on one will involve tackling issues more commonly associated with another. Importantly, these goals are expected to be achieved collectively so that no country is left behind in the attainment of these goals.

The SDGs set to be achieved by 2030 are as follows: No Poverty, Zero Hunger, Good Health and Well-being, Quality Education, Gender Equality, Clean Water and Sanitation, Affordable and Clean Energy, Decent Work and Economic Growth, Industry, Innovation, and Infrastructure, Reducing Inequality, Sustainable Cities and Communities, Responsible Consumption and Production, Climate Action, Life Below Water, Life On Land, Peace, Justice, and Strong Institutions and Partnerships for the Goals. But the question is, how do we achieve these SDGs with the media promoting effective citizen participating in achieving all these goals by 2030.

Ghana was directly involved in the development of the SDGs and as such the goals reflect the aspirations and needs of the people of Ghana. As such, some of the goals are highly important to Ghanaians especially as we lack in most areas of the goals.

The country's official launch of the SDGs in Ghana in February 2016 demonstrate its commitment to enable public understanding of and support for the SDGs in the country. In 2016, Mahama acted as Co-chair of a group of 16 Eminent Advocates for the SDGs, appointed by then-Secretary-General Ban Ki-moon. In 2017, UN Secretary-General António Guterres appointed President Nana Akufo-Addo to co-chair the group of SDG Advocates. The group's aim is to raise awareness and spur momentum and commitment to achieve the SDGs. The appointments highlight the significant role Ghana plays as a leader, especially in Africa, for the attainment of the SDGs on the continent.

The National Development Planning Commission (NDPC) is the lead national public sector institution for integrating the SDGs in national development plans, as well as regional development agendas such as Agenda 2063. Although Ghana can boast of structures and systems supporting the SDGs, achieving the set targets has been erratic and slow paced.

According to the UNDP SDG Indicator Baseline Report 2018 on Ghana, "Ghana had been widely acknowledged as one of sub-Saharan Africa's 'rising star' during the era of the Millennium Development Goals and has made substantial progress in improving access to health care and education over the past two decades. However, a drastic change is now needed to 'reach the furthest behind first', as noted in Agenda 2030, if Ghana is to leave no one behind in its progress towards the Sustainable Development Goals ".

In simple terms, the state of Ghana regarding achievement of the SDGs is not satisfactory, meaning frantic efforts should be made to see light at the end of the tunnel. This calls for the involvement of the media to salvage the situation as it is through:

Collaboration and Involvement: The media is supposed to partner with global and national SDG agencies and participate, monitor and follow up on their activities. This will foster knowledge sharing, make resources available for usage by the media for efficient delivery on the subject to the public.

Education: When the education is effectively done on SDGs, citizens will come to know of their responsibilities towards achieving the SDGs. The media can rebase their programs to place focus on targets and thematic areas of the SDGs, engage citizens in discussions on the subject to create consistent public awareness.

Furthermore, media houses must conduct in-house training for its staff, particularly, on-air members on areas related to the SDGs. This activity will equip reporters with evidence based details to be able to give special reports and documentaries. These reports and documentaries would not only highlight the areas of the SDGs that Ghana is not making progresses but also generate interest in citizens to contribute their efforts in the achievement of the goals. Example, media houses can train reporters in Good health and well-being, quality education, clean water and sanitation, decent work and economic growth etc. these areas forms part of the SDGs goals that some media houses can focus on.

Again, not limited to these activities, emphasizing on the dare need for government to partner with businesses, stakeholders for the implementation of the SDGs is also a role the media can fulfil to raise the flag high. More importantly, the Media can advocate for the need of government to partner with other stakeholders who can also support with their resources to actualize these goals. It is clear that the role in achieving the SDGs is not an individual affair but the cooperation of government and its citizens who are also expected to contribute by playing their part in achieving the goals.

In addition, the media can take lead in showcasing all and sundry, the best means to register their initiatives on the SDGs partnerships platform to inform, educate, network, and be inspired. This will go a long way to suppress the likely public assumption that everything lie in the bosom of government. Many wonder about the share of citizen's contribution for nothing due to very little publicity in the system on the SDGs.

To continue with, the civil society, businesses and representatives of various interest groups need media advocacy to strengthen their participation in the review of progress undertaken regularly in each country to ensure no one is left behind. The work of volunteering to work with like-minded people in communities who have a desire to accelerate Ghanas development and promote peace should be harnessed and encouraged to help make a positive impact on people and the planet.

As a matter of fact, on an annual basis, at the United Nations, there is High-Level Political Forum on Sustainable Development (HLPF). The media can monitor their activities, takes stock of progress at the global level, identify gaps and emerging issues, and recommend corrective actions.

Indeed, achieving the SDGs by 2030 is possible. However, achieving the SDGs is crucial that needs the participation of all stakeholders to help in achieving the goals. This, the media cannot be left out in this circumstance. The media is needed to play its mandate to motivate and promote citizens' interests in helping to realize these goals that would cause us the world we want to see.