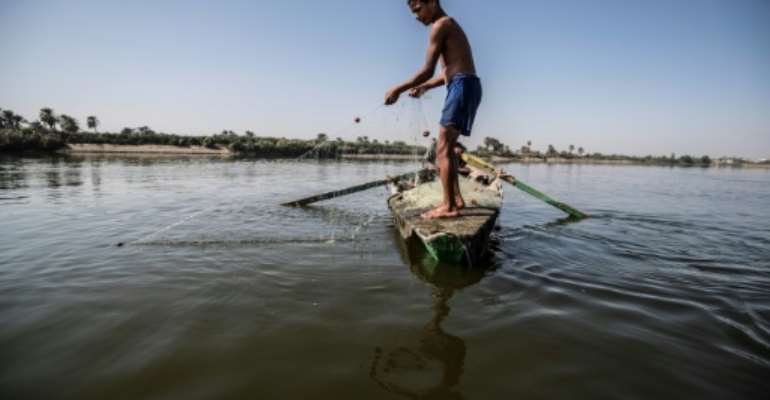 Egyptians depend on the Nile river for their water, and Ethiopia's gigantic dam on the Blue Nile, a key tributary, has raised tension between the two countries. By Khaled DESOUKI (AFP/File)

The former head of Ethiopia's public electric company and 49 others were charged with corruption linked to a dam on the Blue Nile river, the state-owned ENA press agency said Friday.

The Grand Ethiopian Renaissance Dam (GERD), set to be Africa's largest hydro-electric dam, has already troubled relations with neighbouring Egypt, which depends on the downstream Nile River for almost all of its water.

Azeb Asnake, former head of Ethiopian Electric Power, and 49 other people were "charged with corruption in relation to a forest clearing project for the country's flagship mega hydro project, a 5,150 Mega Watts hydro dam," the Ethiopia News Agency reported.

When the project was launched in 2011, the cost was estimated at four billion dollars and it was expected to provide electricity for Ethiopia's population of more than 100 million.

But in September 2018, Asnake was forced to resign as head of the EEP amid allegations of corruption and bad management of several Ethiopian energy projects.

It was not clear if she was placed in detention Friday, and the identities of the others indicted on the latest charges were not revealed.

If the dam's reservoir is filled too quickly however, it would seriously affect Egypt, which depends on the Nile River for 97 percent of its surface water.

Roughly 95 percent of Egypt's 100 million inhabitants live close to the aquatic lifeline, according to UN data.

The GERD has been dogged by allegations of corruption and mis-management almost from the start.

In late 2018, dozens of military and civilian figures were arrested on suspicion of having profited from the project as a result of one of contemporary Ethiopia's biggest anti-corruption campaigns.

Don't succumb to pressure to support LGBTQI agenda – GMM to ...
23 minutes ago