Two killed in air strike on shopping area in Libya 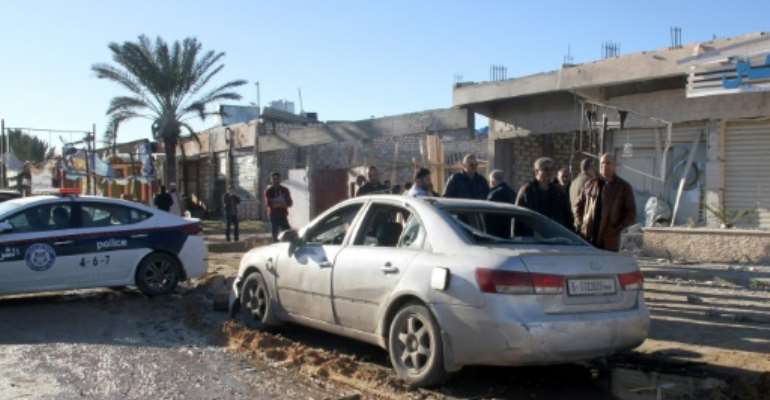 An air strike in Zawiya near the Libyan capital Tripoli hit a pharmacy, a bakery and cars parked on the street, the mayor of the town said. By - (AFP)

An air strike Thursday on a shopping area during rush hour near Libya's capital killed at least two civilians and wounded 20 others, a local official said.

The air strike on the town of Zawiya, 45 kilometres (30 miles) west of Tripoli, hit a pharmacy, a bakery and cars parked on the street, the mayor of the town, Jamal Baher, told AFP.

"Two people were killed and 20 others were wounded," he said.

The air strike took place as the area was busy with shoppers ahead of the weekend, which starts Friday in the North African country.

It comes amid fighting between the Tripoli-based, UN-recognised Government of National Accord (GNA) and rival forces answering to strongman Khalifa Haftar, who is based in the country's east.

Tensions have further spiked in recent weeks as Turkey said it could deploy troops in Libya to support the GNA.

"If this position continues, we have the right to defend Tripoli and we will officially ask the Turkish government for its military support," he added.

Turkish President Recep Tayyip Erdogan, who is in Tunisia to discuss the conflict in Libya, said his country's parliament will vote in January on a motion to send troops to Libya to support the GNA.

"God willing, we will pass it in parliament on January 8-9 and thus respond to an invitation" from the GNA, said Erdogan.

His comments come after the Turkish parliament on Saturday ratified a security and military cooperation deal with the GNA.

Libya was plunged into chaos with the toppling and killing of longtime dictator Moamer Kadhafi in a 2011 NATO-backed uprising.

It has since become divided between two main camps: the GNA and a rival administration in the country's east, backed by Haftar.

The GNA on Thursday accused Haftar's forces of carrying out the deadly air strike on Zawiya.

There was no immediate comment from Haftar's self-styled Libyan National Army.

At least 284 civilians have been killed and 363 wounded since Haftar launched his offensive to seize Tripoli, according to UN figures. Tens of thousands have been displaced from their homes.