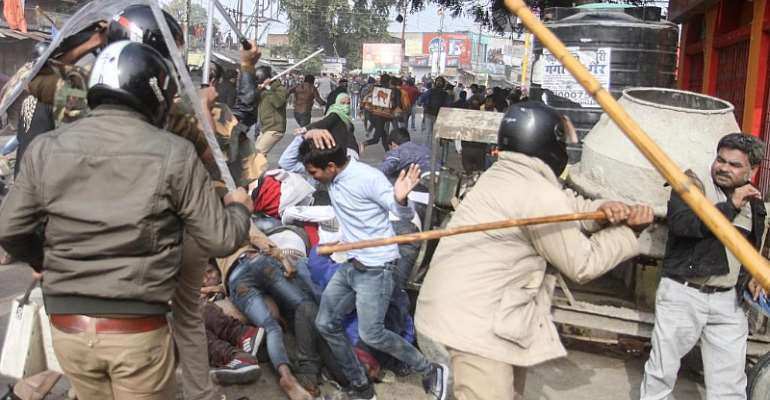 India's northern Uttar Pradesh state is demanding millions of rupees from over 200 people and threatening to confiscate their property as a penalty for damage done to public property during protests against the country's new citizenship law, which critics say is anti-Muslim.

At least 230 such notices have been issued, and most of the people they had been issued to were Muslims, state government officials said on Thursday. The claims are likely to run into tens of millions of rupees, they say.

It was unclear how many of them have been charged with rioting or other crimes, and none have been convicted. State officials have blamed much of the violence on Muslim mobs protesting against the law.

In the town of Rampur, the family of Mohammad Faheem, whose brother-in-law Mohammad Mehmood is in police custody, received one notice.

“Mehmood did not participate in a protest and was at home that day but police still arrested him,” Faheem told Reuters news agency.

Mehmood, sells spices on a cart and cannot even afford a lawyer to get bail, Faheem said.

“How will we pay the fine?” he asked.
Authorities have followed the legal procedure in assessing damage to public property as well as in issuing the notices, said Mrityunjay Kumar, a spokesman for the Uttar Pradesh government.

Critics, however, said such notices are premature.
“You cannot be the complainant and the judge yourself,” Vikram Singh, a former head of police in Uttar Pradesh, told Reuters, adding that the state needed to appoint a competent authority to asses the damage.

“Sending notices to 100, pursuing 50 and succeeding in two will do more harm than good.”

Hundreds of thousands of people across India, including university students, have joined protests against the law, posing the biggest challenge to Prime Minister Narendra Modi since he took office in 2014.

Parallel battle online
Modi's Bharatiya Janata Party controls the state government in Uttar Pradesh, and Chief Minister Yogi Adityanath, a Hindu priest, is one of the leading lights in the Hindu nationalist party.

Students in several Indian cities have led the protests, making use of social media to wage a parallel battle online and teach people how to organise demonstrations.

India's army chief on Thursday criticised the role of students in the protests.

India's army has historically stayed out of politics.