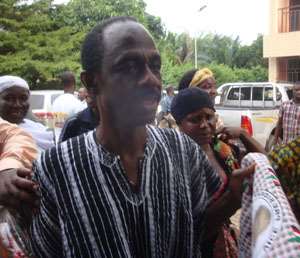 It goes without saying that the greatest gift to the Ghanaian electorate and for the deepening and/or the opportune enhancement of Ghanaian democracy this Christmas was the approval by Parliament of the budgetary spending allocation of GHȻ 443 Million for the creation of a new voters’ register, vehement protestations to the contrary by the key operatives of the John Dramani Mahama-led main opposition National Democratic Congress (NDC) notwithstanding (See “MPs Approve GHȻ 443 M for New Voters’ Register” MyJoyOnline.com / Ghanaweb.com 12/24/19).

The news headline was a gross understatement because the bulk of the budgetary allocation for the Jean Adukwei Mensa-led Electoral Commission (EC) will go towards the purchasing of state-of-the-art Biometric Voting Machines (BVMs), as we have been informed that the machines presently in use by the EC are fast becoming obsolete and need to be either significantly upgraded or totally replaced altogether, if the quality and the results of our elections, going forth from hence, are to meet globally acceptable standards.

You see, Dear Reader, until the approval of the latest budgetary spending allocation, quite a remarkable number of arguments had been made against the need for a new voters’ register. Many of these arguments were quite sound and commonsensical in thrust. But it was the rather characteristically mischievous argument advanced by Mr. Johnson Asiedu-Nketia, the dynastic General-Secretary of the National Democratic Congress, that won the debate and with the latter the day as well, at least in the opinion of yours truly.

The recent graduate of the Ghana Armed Forces Staff College and Ghana’s former Deputy Defense Minister exposed the woeful lack of credibility of the current voters’ register, when Mr. Asiedu-Nketia clearly inadvertently, or perhaps even deliberately and definitely self-righteously, noted that the decision by the current government to create a new voters’ register under the competent stewardship of Mrs. Jean Adukwei Mensa, the new Electoral Commission’s boss or chairperson, meant that the Akufo-Addo-led government of the New Patriotic Party (NPP) was hellbent on over-registering eligible voters in traditional NPP strongholds, thereby guaranteeing at all costs that the ruling party wins the 2020 general election.

Put in simple terms, what Mr. Asiedu-Nketia is actually saying, or rather implying, here is that during the tenures of the previous two NDC-appointed Electoral Commission chairpersons, namely, Dr. Kwadwo Afari-Gyan and Mrs. Charlotte Kesson-Smith Osei, the voters’ registers had been deliberately bloated to ensure that the party in power, which also appointed these EC chairs, that is, the Rawlings-founded National Democratic Congress, would handily be retained in both the Jubilee House and our National Assembly or Parliament as well. We are all aware of the fact that this bloating of the voters’ register used to happen a lot in the Volta Region, the old Volta Region, that is.

At any rate, there is an old English maxim which says that: “What is good for the gander is equally good for the goose.” This pretty much explains the vehement protestation of the Machiavellian leadership of Ghana’s main opposition party, and not essentially or primarily because there exists any forensically sustainable evidence pointing to any decision or intent by the leadership of the ruling New Patriotic Party to use the creation of a new voters’ register in the leadup to the 2020 general election to rig the same in favor of President Addo Dankwa Akufo-Addo.

Going by Nana Akufo-Addo’s performance record, so far, and the generally laudable management of the country’s economy, such cynical proposition on the part of key NDC operatives like Messrs. Asiedu-Nketia and Cassiel Ato Forson could not be more preposterous. Indeed, it is only political novices and plain illiterates like Shatta Wale, the clinically erratic Hiplife artist, who can envisage the phenomenal and materially unprecedented performance and policy achievements of the Akufo-Addo-led government of the New Patriotic Party to have woefully underperformed relative to the previous pathologically kleptocratic, double-salary drawing Mahama-led regime of the National Democratic Congress.