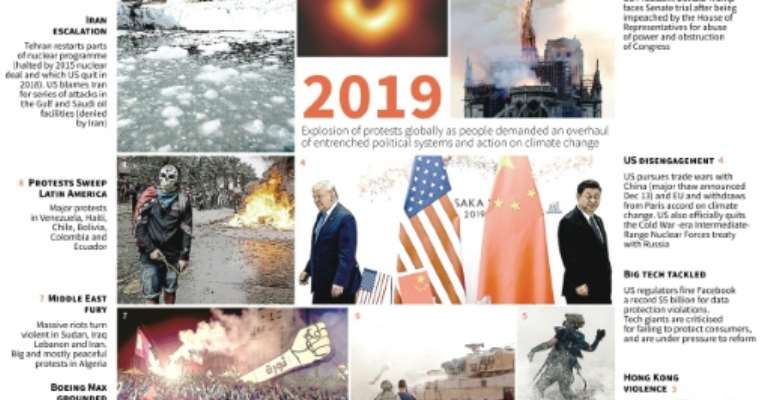 The year 2019 saw an explosion of demonstrations across the world as people demanded an overhaul of entrenched political systems and action on climate change.

Here is a look back at these and other events that marked the year.

He is recognised by more than 50 countries, including the United States. But the army backs President Nicolas Maduro and he remains in his post.

A metro ticket hike in Chile's capital mid-October is the trigger for protests that claim more than 20 lives before a referendum on reforms is agreed.

Bolivia is gripped by three weeks of demonstrations after President Evo Morales claims to win a fourth term on October 20. Dozens are killed. Morales resigns on November 10 and flees into exile as the government works on new elections.

Ecuador is paralysed by nearly two weeks of protests in October and in Colombia strikes and demonstrations against the right-wing government begin mid-November.

On February 22, unprecedented protests break out in Algeria against a fifth term for frail President Abdelaziz Bouteflika, in power for 20 years.

He loses the army's backing and resigns on April 2. But demonstrations continue, demanding an overhaul of the entire political establishment and rejecting new president Abdelmadjid Tebboune, elected on December 12 in polls marked by record abstention.

In Sudan, the military on April 11 ends Omar al-Bashir's three decades in power, a key demand in four months of nationwide protests.

Demonstrations continue until a hard-won agreement in August sets up a joint governing council to oversee a transition to civilian rule. More than 250 people are killed, according to protesters.

In Iraq, mass demonstrations erupt on October 1 against unemployment, corruption and poor public services, degenerating into violence that claims more than 460 lives.

In Lebanon, rolling mass protests start on October 17, triggered by plans for a messaging app tax and turning against the political elite. They continue even after Prime Minister Saad Hariri resigns on October 29, with protesters rejecting new premier-designate Hassan Diab, an engineering professor backed by Hezbollah chosen on December 19 to form a government.

Iran sees an explosion of riots on November 15 after a fuel price hike. Authorities crush the unrest but Amnesty International says more than 304 people were killed, most shot by security forces, a toll denied by the authorities.

After a five-year offensive to seize vast Islamic State (IS) territory in Iraq and Syria, the jihadists were driven out of their last bastion in March by Kurdish-led forces.

On October 27, President Donald Trump announces that IS leader Abu Bakr al-Baghdadi was killed in a US special forces raid in Syria, blowing himself up as he was pursued.

Boeing faces investigations and lawsuits, and is forced to upgrade its systems, in a crisis that costs it billions of dollars.

In mid-December production of the plane is suspended. On December 23, Boeing chief Dennis Muilenburg resigns.

Britain's March 29, 2019, deadline for leaving the European Union following a 2016 referendum is postponed three times, with the British parliament unable to agree to the divorce terms negotiated by Prime Minister Theresa May with Brussels, nor a second accord negotiated by her successor Boris Johnson.

After widely winning early elections on December 12, Johnson gets support at the first reading by the lower house for his accord. He seeks final adoption on January 9, and to leave the EU on January 31, 2020.

On April 10, astronomers unveil the first photograph of a black hole, a phenomenon they were convinced existed even if it had never been seen before.

Drawn from mountains of data captured two years earlier by telescopes across the world, it shows a supermassive black hole 50 million lightyears away.

On April 15, flames destroy the spire and roof of Paris's beloved Notre-Dame cathedral, but firefighters manage to save the gothic building, while many of its arts, relics and other treasures are rescued.

Amid a global outpouring of emotion, nearly one billion euros ($1.1 billion) is pledged for its reconstruction, which will take years. For the first time since 1803, Notre-Dame does not celebrate Christmas mass.

On May 8, Tehran announces its first step back from the 2015 nuclear accord -- exactly a year after the United States quit the deal and reimposed sanctions.

Over the next months Iran re-engages components of its nuclear programme that it had halted, including uranium enrichment.

Tensions mount when Washington blames Tehran for a series of attacks on oil tankers in the Gulf from mid-May.

On September 14, Iran is again blamed when major Saudi oil facilities are attacked by Yemen's Huthi rebels, which it supports. It denies involvement.

In six months Tehran has surpassed the stock of enriched uranium, the level of enrichment and heavy water reserves fixed by the accord and modernised its centrifuges.

June 9 sees the start of the biggest crisis in the former British colony of Hong Kong since it returned to Chinese rule in 1997, with almost-daily pro-democracy protests.

Demonstrations are initially sparked by a now-abandoned attempt to allow extraditions to the Chinese mainland but develop into a popular revolt against Beijing's rule.

July temperatures were the hottest ever recorded, US and European Union authorities announce in August.

Temperature records rise in Europe and the North Pole, and in August, Iceland loses its first glacier to climate change.

Fires ravage Brazil's Amazon and Australia, while Venice is swamped by flooding not seen in decades.

On August 2, the US officially quits the Cold War-era Intermediate-Range Nuclear Forces treaty (INF) with Russia.

Trump's "America First" regime also strikes out alone by pursuing trade wars with China and the EU. It also withdraw from the Paris accord on climate change and its troops from northeastern Syria.

On September 24, the Democrats in Congress launch an impeachment enquiry into Trump after claims he pressured Ukraine to investigate Joe Biden, a rival in his 2020 reelection bid.

Trump is impeached in a historic rebuke by the Democratic-controlled House of Representatives on two counts of abuse of office and obstruction of Congress, but conviction is unlikely to pass the Republican-controlled Senate in a trial expected to begin in January.

On October 9, Turkey launches an offensive into northern Syria to push back from the border Kurdish fighters it considers "terrorists".

Two days earlier Trump had announced the withdrawal of US troops in the area, leading to charges that Washington had abandoned Kurdish allies who were vital in the battle against Islamic State jihadists.

Turkey halts its operation on October 23 after the US and Russia agree in separate deals to ensure the fighters leave the border region.

On July 24, US regulators fine Facebook a record $5 billion for data protection violations amid mounting concerns about the dominance of it and other internet giants Apple, Amazon and Google.

Criticised for failing to protect consumers as well as over tax and advertising issues, the tech titans come under pressure to reform, with threats of investigation, fines and even dismantlement.

France is confronted from December 5 by a three-week standoff between French transport workers and the government over pension reforms, which causes havoc to Christmas travel.

Workers at the national SNCF and Parisian RATP rail and public transport companies walk off the job to protest at the government's plan to meld France's 42 pension schemes into a single points-based one, which would see some public employees lose certain privileges, including early retirement.