The Old Man's Worst is the Young Man's Best 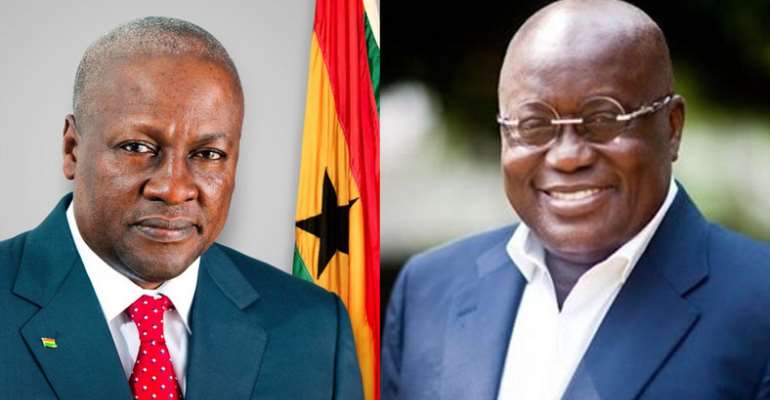 My sleep has been disturbed. It has been truncated by a strong message that came to me. While sleeping, it just dawned on me to wake up. A strong feeling took control over me. It said, "wake up; announce to Ghanaians thus, "the old man's worst is the young man's best". Straightaway, I knew it was about Nana Akufo-Addo and John Mahama.

Yes, Nana Akufo-Addo is operating a "friends and family" government. I shall be a big fool and an innate liar to deny it. It is a fact! John Mahama operated approximately a broad-based government as compared to that of Nana Akufo-Addo. Why then the message that came to me asking me to inform Ghanaians and the whole world that the old man's worst is the young man's best?

The answer is not far fetched. Although the old man has many of his family members and friends in government to the annoyance of many a Ghanaian, he has not openly aided any of them to dupe the nation. None of them is so far known to be using the old man's name to take hefty sums of bank loans without paying them back. None of them is craftily issuing dud cheques to clear their imported goods from the nation's ports on intent of not paying a pesewa in import duties due on their imported goods.

John Mahama, the young man so to speak, is himself allegedly tainted with swindling Ghana by the purchase of the Embraer aircrafts from Brazil under the presidency of the late Professor Evans Atta Mills.

Again, his younger half-sibling (name withheld but Ghanaians do know who he is), issued twelve dud cheques at different times within two years while John Mahama was the president of Ghana to clear his imported heavy machinery from the Tema harbour. The import duties due totalled twelve million Ghana New Cedis (GHS12,000,000). Had the old man not come to power with Kennedy Agyapong (Hon) coming out with his findings on the secret investigations on the theft, the brother of John Mahama would not only have evaded payment of the money he owed on customs and import duties but also, would have continued to dupe the nation. This same younger brother, took a whooping sum of GHS302 million in loans from the now defunct UT Bank. He did not refund a pesewa to the bank. This is the person who calls himself a self-made rich man prostrated to by some Ghanaians who may have dysfunctional brains.

His relationship to John Mahama facilitated the issue of the loan to him without any collateral security requested from him. Look how much the nation has lost through the folly of the bank managers and their Board Members. Was that loan not made possible to him because his brother was the president of Ghana? Could the combined family and friends in Nana Addo's government swindle the nation to that amount of GHS302 million? Ghanaians please tell me now!!!

When President Mahama had seven days to hand over the reins of government to Nana Akufo-Addo, he signed a leasehold contract of fifty years or so of 75% of Ghana's bauxite mineral deposits at Nyinahini to his same crafty brother. Such contracts involving exploration and exploitation of mineral deposits in Ghana must go to the nation's parliament for approval but that of Mahama did not. Is it not thievery executed on the good people of Ghana under broad daylight?

Under the young man, any of his appointees that committed acts of theft against the nation were simply reshuffled to other similar or higher positions. However, under the old man, if any of his appointees involves themselves in corruption and it comes to his attention, he refers them to the appropriate office to be investigated and if found culpable, he sacks them.

Which of these two leaders is better for Ghanaians? Be an honest judge unto yourself. I could write comparing and contrasting the old man and the young man on end but I need to go back to sleep. I hope the little made known here is more than enough to convince the most difficult, fanatic and partisan person of the NDC faithful, except the thieving brigands within the party, that the old man stands taller than the young man in terms of saving the nation's purse, honesty, credibility and incorruptibility.

The young man himself is an avaricious crook but the old man isn't!