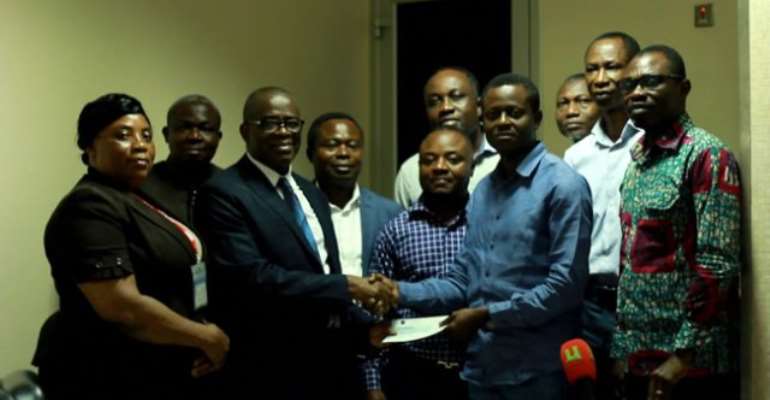 The celebration of Christmas is supposed to come with merry-making as well as hope for many people.

Families and friends attend church for spiritual upliftment and other events for fun.

For some patients at the Komfo Anokye Hospital (KATH), the celebration was an illusion because despite being discharged, they could not afford to settle their bills and go home.

The Hospital detained them.

But thanks to Ashanti Business Owners Association (ABOA), they had the chance to be with their families for Christmas.

The leadership of the association donated ¢100,000 to the Hospital to enable the majority of them to be discharged and spend Christmas with their families.

At the Male Ward of the Clinical Decision Unit at the Hospital was 30-year-old Kofi Owusu who was admitted after fracturing his leg after falling off a tractor.

But after he was treated, the Hospital refused to discharge him due to his inability to settle his bills.

“I am supposed to pay ¢2,500. If I am able to pay they will fix me and discharge me but I can’t afford it,” Kofi who is supposed to undergo another surgery told Luv News.

Sixty-seven discharged patients have also been detained for their inability to meet their financial obligation to the hospital.

In situations like this, it takes benevolent individuals and institutions to often come to the aid of these patients.

Executive Secretary of ABOA, Charles Appiah, said the gesture is critical to have beneficiaries celebrate Christmas at home with relatives.

“We realised they were people who have received treatment that paying bills was a problem so they have been detained in the hospital.

For us, it doesn’t mark Christmas, so we asked what we can do to alleviate them from this plight. Then members brought together their resources and we were able to raise ¢100,000 so that they can also celebrate the Christmas with their families.”

Despite the donation, not all the 67 will go home because the money cannot cover all of them.

The money will cater for 70 percent of the patients. All the women and children were cleared while some of the men benefited.

Impact of unpaid bills on the hospital

“A lot of the times patients are not able to pay their medical bills, and we cannot also allow everybody to go home as a popper else the company will grind to a halt.

“It is the same money we collect and use to buy medications and drugs, disposables, expendables, drugs, pay our water bills, electricity bills,” he said.

He continued that, “…whiles they have not gone home, they are occupying beds and we need them for other patients. We continue to feed them, as they continue to use the hospital water and electricity which bills we pay.

“So long as they remain on the premises of the hospital, if they fall sick again, we need to take care of them, it has a great impact on the hospital operations,” he concluded.

Prof. Poku, however, indicated that arrangement are available to discharge those who show commitment to pay.

The social welfare system of the hospital encourages such patients to enter into an agreement for a payment plan so that they will pay in installment in order for them to go home.

“Our social welfare system allows that each patient can enter into an agreement, a payment plan with the hospital so that they will pay in installment and we allow them to go home.

“Of cause we have some poppers who irrespective of this offer are not able to pay at all.”