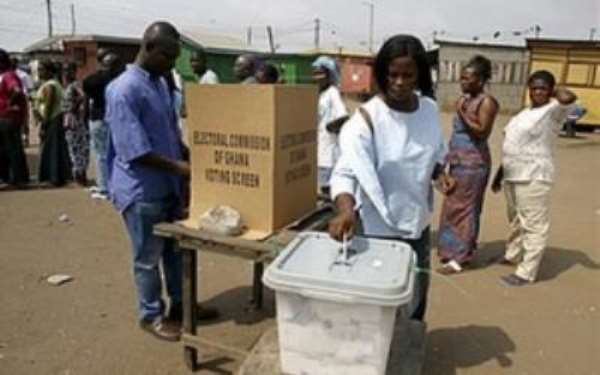 The Electoral Commission (EC) would be reconducting the district level election in the Low Cost Electoral Area, in the Sunyani Municipality of the Bono Region, where there was no winner in the just-ended polls.

Yaw Badu Amamianpong, the Returning Officer of the Electoral Commission in the Sunyani Municipality, in an interview, said “At the end of the polls on Tuesday, 17th December 2019, we had two candidates for the Low-Cost Electoral Area. At the end of the counting, each of them polled 166 votes which mean that there was not a clear lead. There was a tie. In that case, we had to break the tie and get a leader for the place. That is why we are saying that there has been a round-off. Therefore, on the 28th December, we have to go back and vote again for us to determine who will be the assembly member for the Low-cost electoral area,” he said. Low turn out in elections

The district-level election was held on December 17 across the country in all electoral areas.

While the election was generally peaceful, many polling stations recorded very low turnout compared to previous years of the election.

The National Democratic Congress (NDC) flagbearer, John Mahama, had earlier claimed that the low turnout recorded in the just ended District Assembly election was an indication that the cancelled December 17 referendum was bound to fail.

But responding to these claims by the NDC was Communications Director of the NPP, Yaw Buaben Asamoa who said the NDC must rather take full responsibility for the low turnout.

He blamed the low turnout recorded at the elections on the National Democratic Congress' (NDC) intensified 'NO' campaign for the botched December 17 referendum.

Meanwhile, the National Commission for Civic Education (NCCE) has said it cannot be blamed for the low voter turnout that marked the recently held district level elections.

According to the commission, it did enough sensitisation on the election and as a result, most Ghanaians were aware of the exercise.

The Commission, however, attributed the apathy to issues arising out of non-performing Assembly members which has reduced the interest of the people in the elections and also the decision to cancel the referendum.