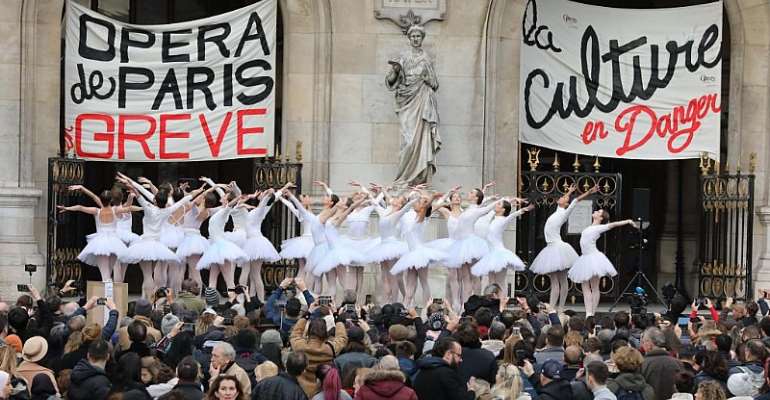 Among the strikers protesting the French government's pension reforms have been musicians and dancers with the Paris Opera, who on Tuesday put on a show in the street for hundreds of onlookers.

About 40 ballerinas in white tutus performed Act 4 of Tchaikovsky's Swan Lake on Tuesday evening on the steps of the Palais Garnier opera house, with banners hanging behind them reading “Culture in danger”.

They were backed by musicians from the Paris Symphony Orchestra, who, along with performers from the state-run Comedie Francaise theatre, have been on strike since 5 December.

Paris Opera dancers have a special pension plan that was introduced in 1698 by King Louis XIV, which allows them to retire on a full pension at the age of 42. The French government is pushing an overhaul of the pension system which would standardise all pensions, and have everyone work until the age of 64.

Dancers say it is impossible to continue dancing until 64.

Their strike, which is entering its fourth week, and has paralysed the country's transport network, has forced the Paris Opera to cancel many performances, including Tuesday's programme.

The Opera said it has lost nearly 8 million euros in ticket sales.

The government has refused to back down on the pension reform, but it will resume negotiations with trade unions in early January.