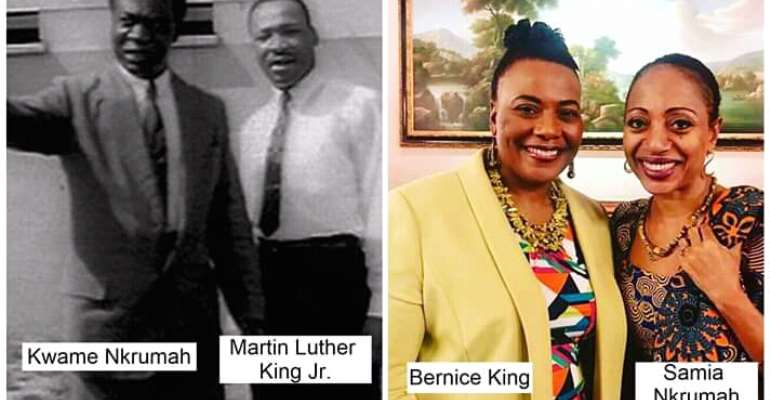 Seeing the emerging pictures of Kwame Nkrumah and Martin Luther King Jnr standing on the beautiful soils of Ghana, rekindles my hope that we're getting closer to the daybreak in our long night of Africa's captivity.

it's a picture apparently taken at the time Dr. King was invited to Ghana by the independence hero, Kwame Nkrumah, to witness the Union Jack go down, as the Red Gold Green with the black Star embossed in hoisted at its stolen place.

As beautifully preserved by the holder of this picture under the spot for over five decades, standing next in coloured, is their daughters, Bernice King and Samia Nkrumah, daughters of Dr. King Jnr and Kwame Nkrumah respectively.

In all the four faces, they're grinning to signal 'hope for victory'.

And indeed, the hope for our victory in the long battle for Africa's emancipation is knocking at our doors.

This picture has emerged at the time the President of Ghana, Nana Akuffo Addo, has called for all Africans living in the Diaspora to come back to their roots in Ghana, Africa, marking the 400th year the first slave ship docked in the Americas.

The emerged picture which on its own speaks prophetic message, tells the African that: "the dream of Dr. King Jnr is about to be manifested, ending the meaningless Africa's independence enslaved in neocolonialism presaged by Kwame Nkrumah".

Yes, Soldiers, the freedom for the Blackman is nigh. We let it slip from our grips at our own peril.

We're ending 2019 on a high note. A note that rests in a watershed moment. 2020 should be our reprieve, a moment we could heave a sigh of relief and pronounce: " yes, it's over".

Not only on social media platforms have we the best opportunity of meeting to brainstorm and strategise to the warfront. Many a Blackman and Blackwoman are rushing in to claim their citizenship in Ghana. The center of the earth is beckoning for the original creation of mother earth. Our physical togetherness is going to arm us the more to take our place as the Kings and Queens of our world.

For far too long, the slave ship that carried our forebears away has stolen from us our betters. Our history was erased and told in a different form, brainwashing our educated folks that: 'Africa was a savagery, and unruly semi-humans'. We're forced to believe that; but for the arrival of the Whiteman on our shores, we'd walked naked and slept in tree tops.

But today, those of us who didn't believe that version of history and traveled across the length and breadth of the world to gather wisdom have come to learn of the deception in the Slave master whose chief motive was to pillage and siphon our bequeathed resources.

Our stolen artworks in their museums tells it all.
Our minerals that are channeled through drains that irrigates their automobile companies is our answer to whom we've come to know truly - the supposed better teacher.

The gradual replacement of our organic food with toxified genetically modified organisms should compel us to review our marriage with our supposed true suitors.

The uneven trade deals that leaves our cocoa farmers poorer whiles the chocolate makers swim in insatiable riches enlighten us on the real motive of the supposed business partner we gladly welcomed to our shores.

Yes, Soldiers, the light of the day is shining on all the hidden motives enshrouded in the closet of the supposed friendly visitor we welcomed centuries ago.

We're sons and daughters of noble African blood. We don't use deceptive means to claim what is due us. We don't use violence to claim our inheritance. With our awakened African power, armed we go, we're taking back what's ours.

Our dawn is nigh.
Long live the beautiful spirit of Martin Luther King Junior!