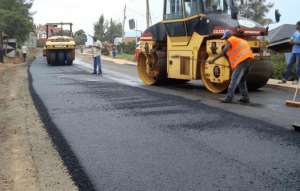 Aggrieved road contractors have given the government one week ultimatum to pay arrears owed them before 1st January 2020 or face their wrath.

They have accused the government of not fulfilling earlier promises to pay them.

The contractors say all attempts to get the government to pay them their outstanding arrears have not been successful.

Chief Executive Officer of the Ghana Chamber of Construction Industry, Cherry Emmanuel, in an interview Citi Business News said the government must pay their arrears before January 1 2020.

“We are giving government up to the 1st of January 2020, if nothing is heard we will take action. We have had a lot of meetings with government and promises have been made. We just want them to go by their words if not we will come out and expose them with the truth” he said.

President Akufo Addo in October this year directed the Minister of Finance and Economic Planning Ken Ofori-Atta to release some GH¢2.2 billion to pay road contractors working on various roads in the country.

Vice President, Dr. Mahamudu Bawumia, had also assured road contractors in the country that their certificates and monies owed them by the government was going to be paid before the end of November 2019.

But the contractors say this is yet to happen.