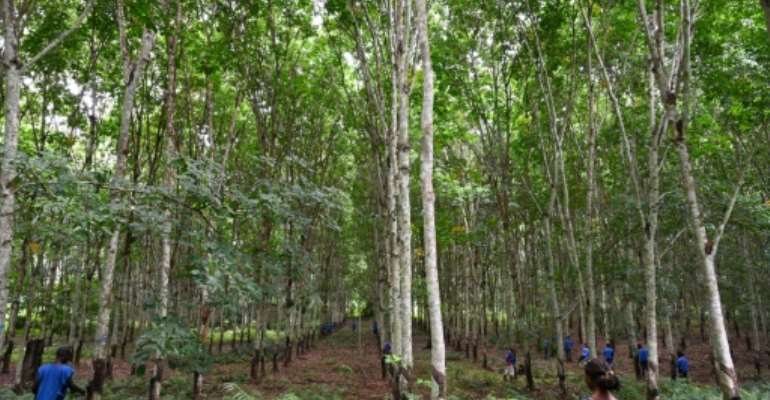 Ivory Coast's rubber plantations are being accused of damaging the environment and worsening food security. By ISSOUF SANOGO (AFP/File)

A decade after rubber was heavily promoted as a goldmine for Ivory Coast's cocoa-dependent economy, planters are under pressure to address criticism that they are damaging the environment and weakening the country's ability to feed itself.

"Well-managed rubber production is an asset," said Eugene Kremien, the president of the Association of Professionals of Natural Rubber (APROMAC), whose detractors argue that plantations exhaust the soil and endanger food security and forests.

The association is seeking to show that the rubber industry can meet mounting demands for sustainability, both for the environment and its producers.

The stakes are high in a country that produces 60 percent of Africa's rubber and holds seventh place worldwide. Annual Ivorian production is 624,000 tonnes and some forecasts hold that it may reach one million.

Some 160,000 producers earn their living from rubber plantations and employ tens of thousands of workers who "tap" the hevea trees by cutting grooves into the bark to make the latex — natural rubber — bleed out into cups.

At the end of 2010, when world rubber prices were high, conditions were ripe for a boom.

The Ivorian government invested 40 million euros ($44.3 million) to promote production, leading to the creation of 110,000 hectares (about 270,000 acres) of new plantations.

The state provided training in the different skills of the rubber business and helped open tracks in rural areas to transport produce.

Since rubber trees are productive 10 months of the year, compared with one or two annual harvests for other crops, many peasant farmers turned away from their traditional cultures in a rush for "white gold".

"The planters let themselves be lured by quick gains, abandoning the growing of food crops," said Jean-Baptiste Koffi, president of the Federal Union of Ivory Coast Consumers, active since 2012. 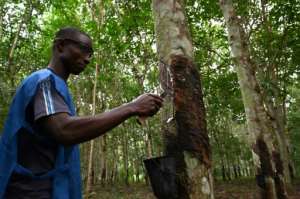 A trainee learns how to bleed a hevea tree to harvest latex rubber. By ISSOUF SANOGO (AFP/File)

"The production of bananas, cassava, yams, maize and rice, which are part of the diet of Ivorian people, has dropped in favour of speculative crops, particularly cocoa and rubber," Koffi sad.

But global market prices for rubber and cocoa have slumped during the past five years.

While some analysts expect cocoa prices to rise again, the forecasts for rubber are dim and discourage economic reliance on the industry.

Numerous NGOs accuse the rubber industry of endangering food security in Ivory Coast and forcing a West African giant to import products such as rice even though it is famed for its rich soil. 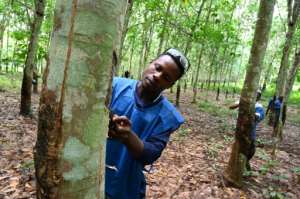 APRAC is urging rubber planters to devote between five and 10 percent of their land to market garden produce and breed the likes of chickens and rabbits as a valuable source of support income.

Kremien dismissed perceptions that rubber growing depletes the soil and said his industry -- "unlike cocoa growing" -- was not to blame for the country's deforestation. Ivory Coast has lost almost all of its wild forests in half a century.

Indeed, according to Kremien, the canopy provided by rubber trees helps to retain precious moisture from rainfall, which would otherwise evaporate in open fields.

"By growing hevea we are reforesting. Where others destroy, we are rebuilding," he contended.